To paraphrase Mark Twain, reports about the death of PCs have been greatly exaggerated. Or they have for Apple, at least.

According to new numbers from market analysts IDC, Apple sold an impressive 4.9 million Macs in the third quarter of 2014, representing an overall increase of 8.9% year-over-year. What does that mean? In short, that Apple is now in the top five PC vendors worldwide based on number of units shipped. 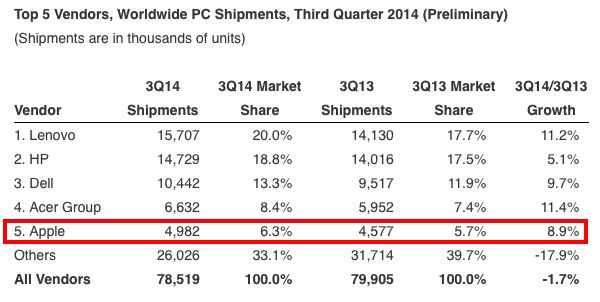 In domestic shipments Apple now places third, with just Dell and HP ahead of it. These shipments increased an impressive 9.3% year-over-year. The overall shipments of PCs within the U.S. totalled 17.3 million, signalling 4.3% growth.

Apple also moved into the no. 5 position worldwide, overtaking ASUS. IDC credits Apple’s strong showing with the “company’s steady growth, along with recent price cuts and improved demand in mature markets.” When combined these factors have allowed Mac shipments to consistently outgrow the market.

While certainly good news, these impressive Mac numbers are, in fact, nothing new for Apple. While the rest of the PC industry has struggled, Macs have gained world market share 32 out of the past 33 business quarters.