Apple’s fabulous iPhone used to be the number one reason crime was on the rise in New York City, but now that Apple’s added Activation Lock to iOS 7, thieves have given up their iLust and are targeting Samsung phones like never before.

Just look at the sudden change in thefts in the chart below: 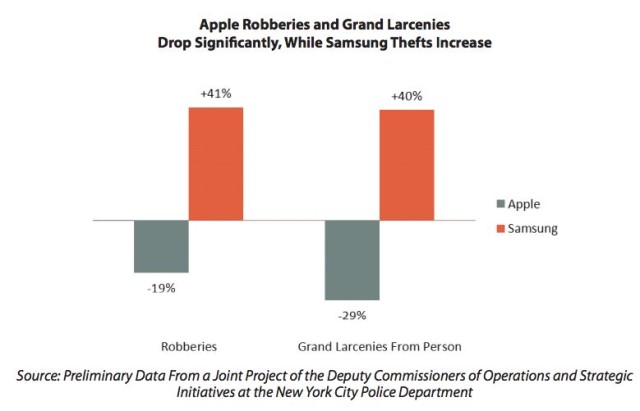 According to a study on smartphone robberies in London, San Francisco and New York, Apple’s introduction of Activation Lock in iOS 7 corresponded with a decline in iPhone thefts, but also caused Samsung device thefts to skyrocket

The report shows iPhone robbers in San Francisco declined 38% while Samsung thefts increased 12% in the sixth months after activation lock was added. In New York City the picture was even worse for Samsung devices, which saw thefts increase 41% and grand larcenies increase 40%.

Thieves are only going to get more attracted to the Galaxy line up too now that Activation Lock is on by default on the iPhone 6 and 6 Plus, while Samsung has been slow to bend to the demands of a kill-switch from U.S. politicians and law enforcement officials. Both Google and Microsoft promised they would add kill switches to their mobile operating systems in June, and will have to implement them by July 2015 when a new California law will require all phones sold in the state to have a kill switch.