Call alerts are all well and good but — even on the Apple Watch, when they’re being delivered directly to your wrist — it’s likely that there will be situations when users won’t be aware of them, and could miss important calls or alerts as a result.

Apple’s trying to crack that problem with a new patent published Tuesday, describing a “Self adapting alert device” that would vary the volume or style of user notifications to your iPhone or Apple Watch depending on where you are at the time. 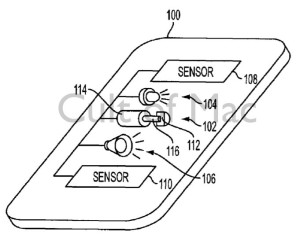 Alerts would vary based on sensing the operating environment of an iOS device (for example, indoors, outdoors, or contained in a purse or bag) through a series of sensor measurements. From there the patent would be able to work out if you’re likely in a busy shopping mall or a conference room and alter its alerts accordingly.

In some situations this would mean raising the audio level to make it more easily noticeable, while in others it may mean switching to vibrate to obtain the user’s attention through tactile sensation.

This isn’t the first time similar technology has been explored. Llama, the location-aware app for Android, uses phone masts to determine your location, and then changes your ringer, vibrate and ringtones depending on where you are, or what time of day it is.

Still, this could be an invaluable tool for Apple — particularly as Apple moves into the mobile health space with future iterations of the Apple Watch.

Missing a push notification about a new tweet may not be life-threatening, but if Apple gets to the stage where iPhones and Apple Watches are routinely used to predict heart irregularities, for instance, making sure users are given this information in a timely fashion becomes incredibly important.