Earlier today, I was reading Infoworld’s article, The iPad questions Apple won’t answer. The first question they listed was “Can you save and transfer documents to the iPad?”, and their assumed answer was “No”; they suggested that the only way to do this would be to open a document from an email message.

I read that and I knew it wasn’t the case. I knew I’d seen something that suggested to me that the iPad has on-board storage for documents. It was something I’d seen somewhere before, and for a moment I couldn’t think where. Then I remembered. 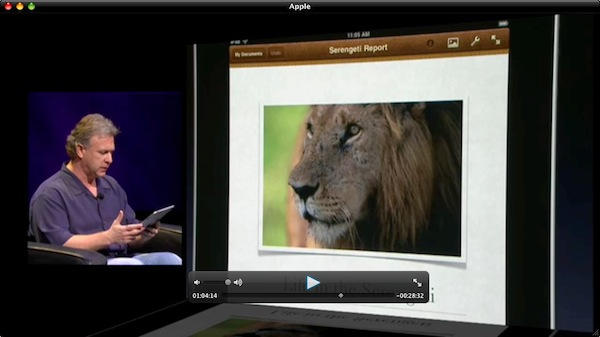 This is at 1:04 in Apple’s official iPad announcement event.

Phil Schiller is demonstrating the new iWork for iPad. He’s just shown us Keynote, and visible in the corner of the screen was a button called “My Presentations”: 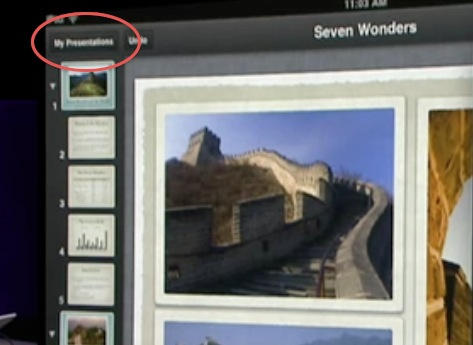 Then he moves on to Pages, and we see it clearly: “My Documents”. It’s like Windows 95 all over again.

It’s pretty clear that this is on-board storage for documents on the iPad. Some questions remain, though: is this just a Pages feature, or might it be a system-wide folder that other apps can use for document storage? (The fact that the same button in Keynote is called “My Presentations” suggests it will be for Pages only, but hey, a man can dream.)

Another thought: how will we be able to reach into this My Documents library from outside the iPad itself? Will it sync to something in iTunes? Will it magically sync, Dropbox-style, to a Finder location? (We can hope, right?)

As to the name “My Documents” – well, perhaps it’s just a working title. Maybe it’ll be called something different when iWork for iPad actually ships. Maybe.