With Apple set to unveil the eagerly-anticipated iPhone 6 later today, that can only mean one thing: that the public launch of iOS 8 isn’t far away. And chances are that OS X Yosemite’s not too far behind it, either.

As both of Apple’s operating systems are set for a refresh, Chitika Insights has run the numbers to examine iOS and OS X version distributions at this exciting juncture for Apple: sampling tens of millions of U.S. and Canadian online ad impressions running through the Chitika Ad Network.

The numbers, catalogued between August 25 and 31, show that a massive 90 percent of North American iOS Web traffic comes from devices running iOS 7, largely thanks to Apple’s update strategy of directly prompting eligible users to upgrade.

Of the users sampled, more than 65.4 percent of iPhone Web traffic is generated using iPhone 5 family products, including the iPhone 5, 5c and 5s. Users of older iPhone models make up the remaining 34.6 percent.

OS X is a slightly different matter, since as Chitika points out “there is a larger legacy base of Mac desktops and laptops, many of which may not necessarily be upgrade eligible to some more recent OS X versions.”

Even with that being the case, however, a majority of OS X Web usage (52 percent) comes from users running the latest publicly available OS X version, OS X 10.9 Mavericks. 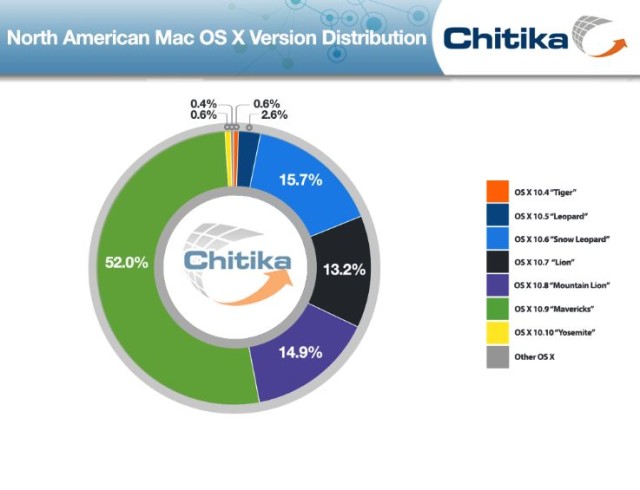 While Apple hasn’t yet announced when the public version of iOS will launch, it is likely to be sometime next week, while history would suggest that the OS X refresh will come later this fall.

“Apple’s precise announcements on September 9 will crystalize any shift in the company’s mobile and OS strategy, and as the largest company in the space, likely prove to have a tremendous impact on the entire industry and its direction,” Chitika analysts note.