Apple is expected to launch a tsunami of new products this fall, starting with next week’s official unveiling of the iPhone 6. With the rumor mill hitting all-time new heights of crazy, you’d think iPhone 6 sales would be off the charts when it hits stores September 19. But Piper Jaffray’s top Apple analyst, Gene Munster, is predicting that won’t be the case.

Munster hasn’t been one to shy away from bold Apple predictions (no matter how many times he’s wrong), but his latest note to investors claims iPhone 6 sales probably won’t be as nearly as huge as the iPhone 5s during launch weekend. 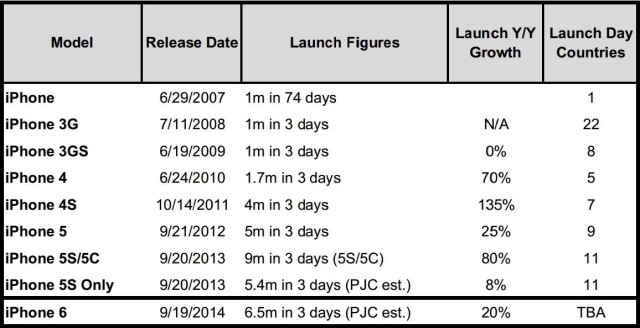 “In the near term, we caution that there will likely be noise in the opening weekend iPhone 6 sales numbers given difficult comps from last year’s 5C channel fill.”

Munster estimates Apple will sell 6.5 million new iPhone 6 units during launch weekend, which would represent a 28 percent decrease from total iPhone sales last year. The drop in sales numbers would be due to the “channel fill” of more than 3 million iPhone units in 2013 when Apple replaced all iPhone 5 units with the iPhone 5c, boosting total new iPhone sales for the weekend.

Interestingly, Munster has raised his target price on AAPL from $105 to $120, expecting the launch of new products and services will boost the stock’s price.

Other analysts have predicted an unprecedented demand for the iPhone 6 as Apple has order at least 68 million units for 2014 — double what it ordered in 2013. The iPhone 6 is expected to be revealed at a September 9 event and to include a larger display, sapphire glass, faster A8 processor, improved camera and a new mobile payments system supported by NFC.