While the number of leaks regarding the 4.7-inch iPhone 6 means a lot of people aren’t expecting to be surprised come September 9, the larger 5.5-inch phablet iPhone remains something of a machine of mystery.

A new component uncovered by French Apple website Nowhereelse.fr, however, purports to show a 2,915 mAh capacity battery from the lesser-seen 5.5-inch model iPhone 6.

Provided that the part is legitimate, it represents a considerable increase from the 1,570 mAh battery included in the current generation iPhone 5s. 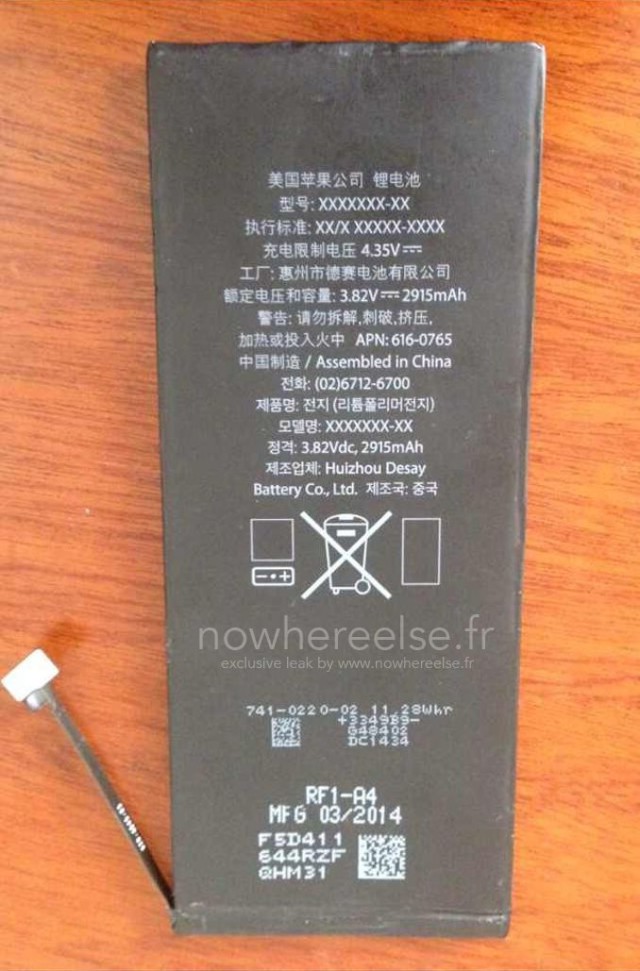 Given that the battery life of the iPhone is one of the perceived weaknesses of the device that has allowed rivals to take potshots at it, this may suggest that battery life is at last one of Apple’s major considerations with the new iPhone — although the larger screen size will also likely have an impact on battery life.

However, it’s also a smaller battery than that found in similar-sized handsets like the LG G3 and Samsung Galaxy Note 3, which boasts 3,000 mAh and 3,200 mAh batteries. With that said, Apple generally has tighter control over battery performance with iOS 8 than the makers of Android handsets, so a smaller battery is no guarantee of a shorter battery life.

The 4.7-inch iPhone 6 is set to debut September 9, and will possibly to go on sale ten days later on September 19. The 5.5-inch iPhone 6, which has seemingly suffered numerous production delays, most likely won’t arrive at the September 9 event, but is set to be released in either late 2014 or early next year.

Number of comments on this postLeave a comment
Posted in: News Tagged: battery, iPhone 6, phablet