I was intrigued when I read my colleague Johnny Evans’ post about 7digital and its 4 million DRM-free tracks available in 320k MP3 quality, so I went to the site to pick up a copy of the classic Harry Nilsson album, The Point, which I’ve been wanting to buy.

I found the site easy enough to navigate, with a pleasant balance between text and graphics that seemed a refreshing change from iTunes’s hevavily-graphics-oriented interface. I located The Point quickly, listened to a couple of preview tracks and thought, hey, why not? Signing up for an account was even relatively painless and straightforward, and when it came time to give my address, I put in that of a friend who lives in London, which is when the deal started heading south. See how after the jump.

When I proceeded to check-out I was met with the following message: 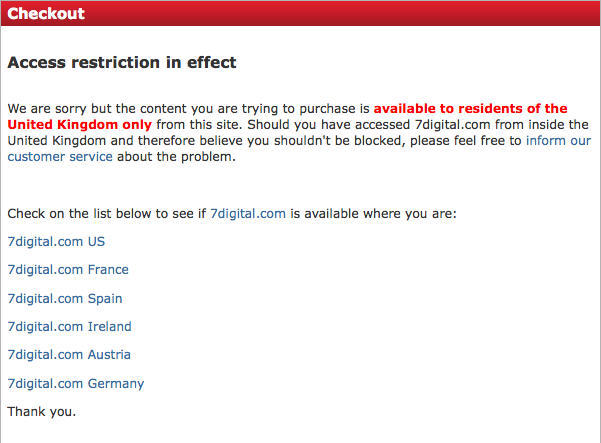 Proceeding to the US store, I found a far more stripped-down version of the interface and suddenly 7digital started to seem a tad thin on presentation. I searched for Harry Nilsson and was delivered 76, artists, 127 products, and 811 tracks, none of which included Harry Nilsson or The Point. 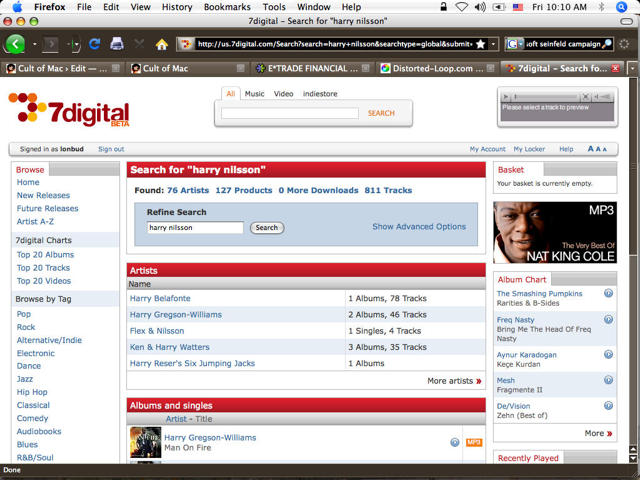 OK, I could live without The Point for another day, so I started poking around for more music. Little Feat? Nothing. Well, not “nothing,” just every title in the catalog that includes the ever-popular notation So-and-So artist feat. Such-and Such guest, or Blah-Blah song feat. So-and So.

Lowell George, then. 7digital offered one album, perhaps the worst piece of crap he ever released in his all-too-brief career. I also began to notice that tracks in the US store feature a lot of 192k MP3s and not so many 320k. A quick hop over to iTunes delivered me The Point, half a dozen Little Feat albums, and several Lowell George selections, including the seminal Thanks I’ll Eat it Here.

7digital may have scored a coup by getting selections from all four major record labels, and perhaps its European customer base is pleased with what they have on offer. It says here, however, Apple and iTunes can rest easy about any threat to iTunes’ dominance of music download sales on this side of the pond.

UPDATE: An email query about buying selections in the UK store from the US was answered within a couple of hours by 7digital support. It says: We are preparing to release a more extensive US store later this year. If you like, we can take down your details and send you an email when the new site is launched. They do get points for being responsive.