In the smartphone race there are only two players: iOS and Android. That fact is clear in IDC’s new report for worldwide smartphone shipments for the second quarter.

Combined, iOS and Android account for a whopping 96.4% of global smartphone sales. IDC notes that there’s “little space for competitors,” which is a mild way of saying that every other platform has little to no hope.

“The worldwide smartphone market reached a new milestone in the second quarter of 2014 (2Q14), moving past the 300 million unit mark for the first time in its history,” notes the report. The smartphone market is continuing to grow healthily. Shipments grew 25.3% from 240.5 million units sold this time last year. 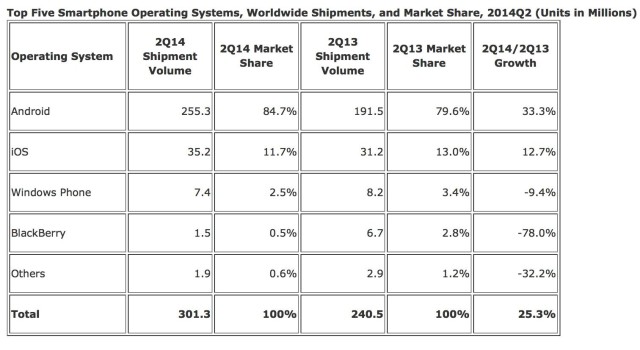 Samsung and the China-based Xiaomi are the two biggest Android vendors right now, and Samsung’s sales are slowing while Xiaomi’s are taking off. “Samsung once again led the charge, accounting for 29.3% of all Android-powered shipments, down from its 40.0% share of two years ago,” notes IDC.

Apple owns the majority of handset profits with Samsung in second, according to another recent research report. iOS accounts for only 11.7% of global smartphone market share, but it’s important to note that Apple only ships a handful of devices at relatively steep prices compared to Android.