Tim Cook has led Apple into the front of the LGBT-rights movement with company appearances at Gay Pride parades and Wall Street Journal op-eds demanding equal rights for gay workers, but according to one Apple Store customer in Portland, some of Cook’s employee don’t share his enthusiasm for inclusion.

Adam Catanzarite, who self-identifies as queer, has taken to social media after an Apple specialist printed off his receipt for a set of EarPods with a not-so-subtle homophobic slur tossed in the spot reserved for his email addresses. 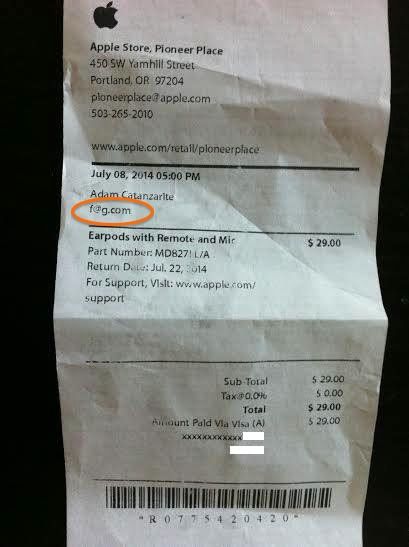 Adam says he explained the situation to a store manager to try to get it rectified, but not pleased with Apple’s actions, says he feels it’s important to raise awareness and shared the receipt with the letters ‘f@g.com’ in the email address field.

“Being queer and having worked with queer youth, I know first-hand that this is an example of the type of #homophobic beliefs and actions that lead young people to harm themselves. This type of action is NOT OKAY, especially from a company that prides itself on being LGBTQ inclusive and welcoming.”

Catanzarite, who works as an HIV prevention specialist with Cascade AIDS Project, is encouraging friends and anyone else sees the Facebook post to share so with friends “to let them know that homophobia does not have a place in PDX.”

Apple has reportedly been informed of the incident but declined to comment on any action it plans to take when we reached out this afternoon.

It should be noted that the Apple employee who checked out Catanzarite may not have been the one to enter the slur. The Apple Store’s system automatically brings up the last email address used with that credit card, or gives the specialist an option to enter an address manually.

@cultofmac I wrked @ appl store.1000s of transactions,we just throw any random email addy Into that field smtimes. F&G are next to

@cultofmac each other. I wudnt be surprised if it was just a faux pas. I’m gay btw