A lot of people are nonplussed by the iPad because it doesn’t seem so new, or even very useful. It’s just a big iPod touch. So what?

But one of the most interesting things Apple said has about the iPad is how it improves the “experience” of doing everyday computing tasks — email, web browsing, making photo slideshows.

Again, people say so what? We’ve already got laptops for email and watching movies. But improving experiences is exactly what Apple is great at. The iPod wasn’t the first MP3 player, but the first anybody could enjoy using. The same thing is going to propel the iPad into the mainstream. Everyday tasks like sending email and reading newspapers are going to be so much nicer on the iPad than any other device. (see for example the New York Times screenshot after the jump.)

Software developer Fraser Spiers has been digging through Apple’s iPad videos, pulling screenshots to take a closer look at the details of the iPad’s UI. His conclusion? It’s going to provide a very good experience not just for media consumption, but also media creation.

Look at what’s in here: a full stylesheet engine, multi-column page layout, a complete library of cell formulae and a full set of builds and transitions. You can create a Magic Move transition on the iPad. That’s probably the most advanced technique you can do in Keynote, and it’s there on the iPad. 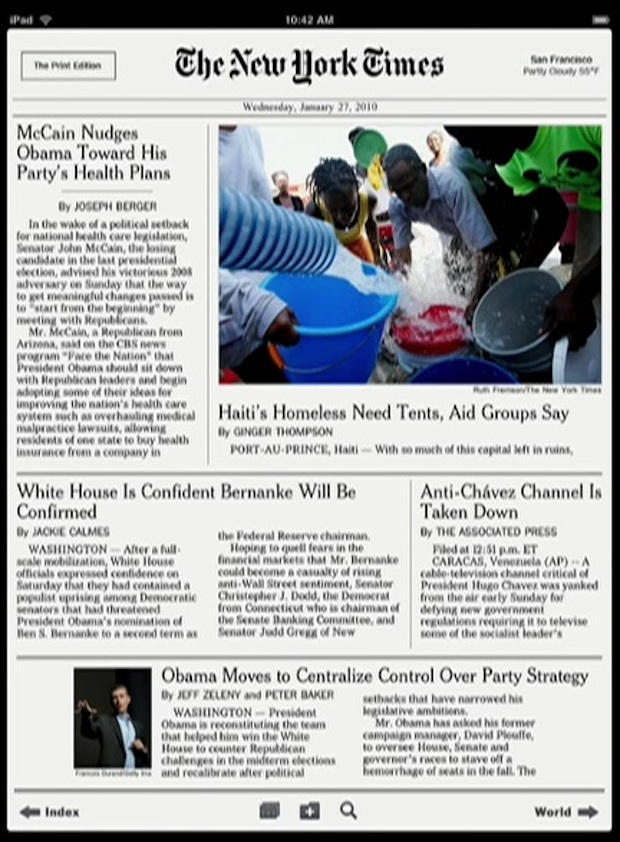 Posting the screenshots to Flickr, Spiers has created a good walkthrough of the iPad’s UI — the menus, popovers and different multitouch keyboards used to interact with the device.

Look at the UI for Apple’s text editor, Pages. It has a full-featured toolbar with all the controls you get in the desktop version. 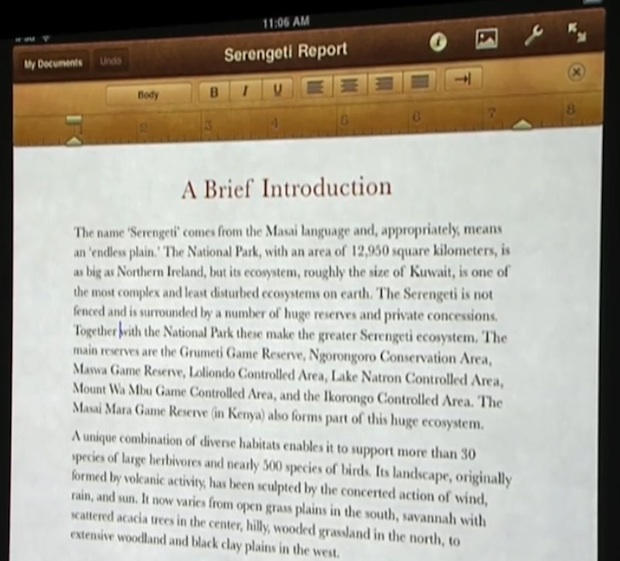 But when typing, you switch to landscape mode, and the ruler and toolbar disappear. 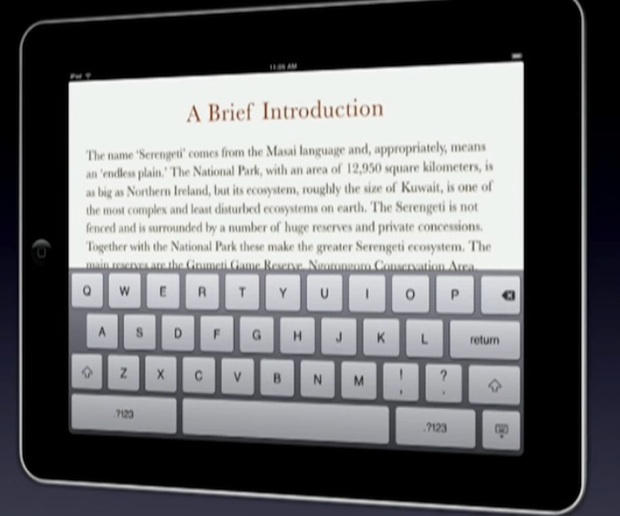 This is why the iPad will succeed. The iPad’s sophisticated modal UI will make the consumer-level computing “experience” so much better than we are currently accustomed to. That goes for laptops, desktops and smartphones.

In the comments, a corespondent called Ian Turner sums it up nicely (emphasis mine):

“For me, the iPad is all about freeing up content creation. A much wider spectrum of users will be able to use it. Children will take to it even more naturally than writing because they just have to touch it. Other people who just are not currently comfortable with the computer will suddenly have so much more confidence because there is so little to learn. But it is even more than freeing up who can create content, it is also about where you create content. If you get a creative urge whilst watching the TV, you can just doodle away on your lap, putting it down and taking it up whenever you feel like it. Reading and writing become much closer to the same experience because you can just flick from your ebook to your note taker and back again all in a form factor you can use whilst standing on the train. Even more importantly for me, it really does free up people working in the field to be much more spontaneous. Imagine a geologist working in the field. They don’t have to sit down and open up laptop, you can just take it out of your bag, download a quick picture, type a quick blog post and send it over 3G. The work becomes much more free and spontaneous for everyone working in the field like scientists, engineers, journalists, teachers, and even relief workers. Something so light and so useable really will change the way that we create things in response to the world around us. For me, I think the iPad will change the world even more than the iPhone.”