I use OS X’s Dictation feature all the time while I’m working, but a new patent application published Thursday suggests that Apple’s looking to go much further when it comes to having users talk to their Macs.

The Intelligent Digital Assistant In A Virtual Environment application was filed February 4 this year, and describes a Mac-based Siri every bit as smart as its mobile iOS counterpart.

The patent application depicts a future OS X dock featuring an icon for Siri, which could be available to use for dictation or commands from inside various different programs. 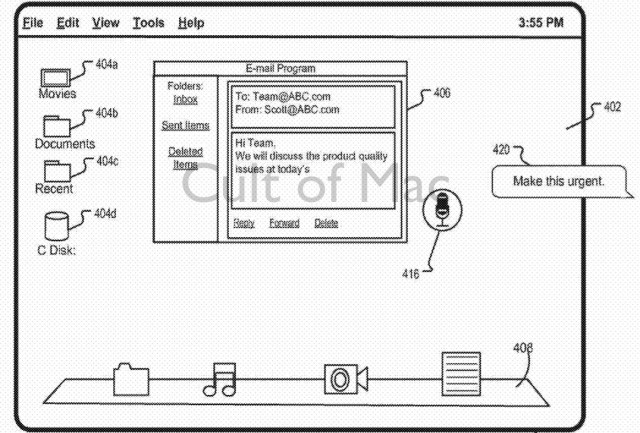 In one embodiment described, users would have the option of carrying out tasks by dropping files or folders onto the Siri dock icon, followed by a command such as “Sort by date.”

While it’s not yet clear whether Siri will be arriving on our Macs anytime soon, there’s no doubt that users have wanted this kind of functionality since Siri first arrived with the iPhone 4s. We’ve seen various Mac apps attempting to mimic similar functionality, although none as deeply as Apple’s patent application describes.

Given the amount of cross-platform functionality we’re set to enjoy with OS X Yosemite and iOS 8, this would be the perfect time for Apple to shift over one of iOS’s core features to its Mac bigger brother. And since everyone and their mother is coming up with virtual assistants for mobile, this would be a great way of helping Apple stand out from the crowd.