Apple is set to open its new Dutch brick-and-mortar retail store this Saturday, according to ifoAppleStore.

This will be the third Apple Store to open in the Netherlands, with previous retail outfits opening in Amsterdam and Haarlem. The store will be located in Den Haag (The Hague), which is the third largest city of the Netherlands, after Amsterdam and Rotterdam, but an important city since it is the seat of the Dutch government and parliament, the Supreme Court, and the Council of State. 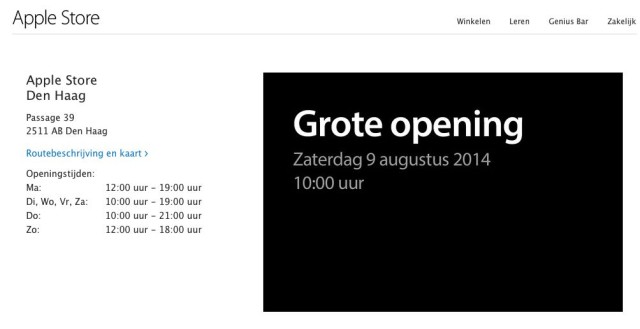 Notably the store is set to include a 360-degree Genius Bar. Recently Apple was able to obtain a European trademark covering the design of its stores, which in theory stops any of its rival companies copying its iconic design.

Under the guidance of new retail head Angela Ahrendts, Apple is following an aggressive expansion strategy when it comes to opening overseas Apple Stores. Yesterday we revealed that Apple is set to open its second Turkish store in Istanbul this fall.

Number of comments on this postLeave a comment
Posted in: News Tagged: Apple Store, Netherlands