In an age in which the latest movies can be watched on your iPad or even iPhone, it’s questionable exactly what the point of going to an actual movie theater is. Unless you’re a fan of seeing movies projected, that is.

Well, soon Apple may be set to disrupt Hollywood in that area too — at least if you believe a patent published on Tuesday.

Describing a Video Delivery System Using Tablet Computer and Detachable Micro Projectors, the application asserts that future iPads may feature one or two detachable projectors, which users would clip onto (or otherwise sync with) their iOS devices to turn their front rooms, office walls, or even the back of a train seat into a miniature screening room. 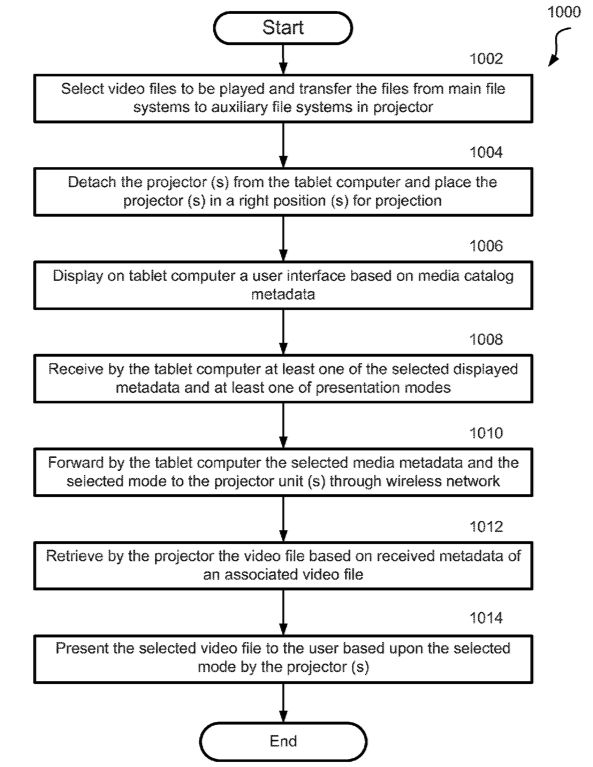 The patent notes how the iPad is used as a remote control that controls the operation of delivering a video file through the projectors, while the tablet plays the audio portion of the presentation using its in-built speakers.

It would even be possible to increase the screen size, as the patent goes on to explain how the two projectors could be positioned to project two adjacent screens that would each show a portion of the the bigger picture.

While the majority of drawings in the patent describe the mini-projectors as clipping on to the iPad, not all of them do. In one iteration, the projectors would work wirelessly, which would make a lot more sense and avoid your iPad being made unnecessarily bulky.

Now we just have to wait and see if Apple will actually make one — and hope that some iBore won’t use it as an excuse to broadcast their family movies at every possible convenience.