Apple Maps crashed and burned coming off the runway in iOS 6, but new additions in iOS 8 beta 3 show Apple’s had a change of heart, and is even making it easier for Apple Maps users to jump to Google Maps and other services thanks to some new UI tweaks.

Starting in iOS 8, users will be able to run a search for locations in Apple Maps and use either Apple’s own driving and walking directions, or switch directly to another app already installed on your device via a simplified menu. 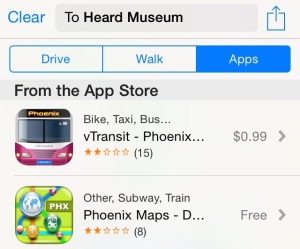 The small UI change gives users quicker access to use transit directions and other services that were rumored for iOS 8’s Apple Maps, but failed to make an appearance at WWDC.

Apple acquired the popular free transit app Embark last fall, with reports suggesting the small company’s expertise and technology in transit mapping data would be directly integrated into Apple Maps. Those features might not make it in time for iOS 8’s release this fall, but it looks like Apple’s decided the next best thing is to just make it easier for customers to use what they want.

Along with the direct link to other maps apps, Apple has beefed up Maps by updating location data every single day, as well as adding Flyover City Tours that zoom users to popular landmarks of the world’s biggest cities. The Apple Maps service also recently expanded to the iCloud.com beta, purging Google Maps from Apple’s web experience too.