With so much focus on its iOS devices, it’s easy to forget that Apple is constantly innovating for its Mac product line as well.

On Thursday, the U.S. Patent & Trademark Office published a patent application from Apple that reveals the company’s investigations into possible future Mac Keyboards which support gesture controls, as well as in-key pictograms, symbols, and glyphs.

Implemented in a future keyboard, this would allow Apple to provide a systems and methods for providing multi-functional keystacks. Essentially this would allow individual keyboard keys to act like mini displays, with symbols for tools like Pages and YouTube, or customized support for additional languages like Arabic and Ancient Greek, or even musical notes and coding functions. 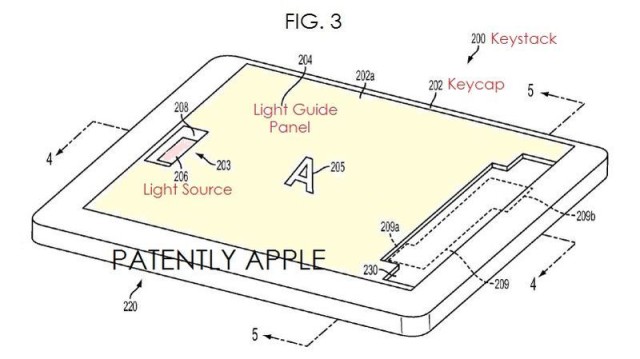 According to the application, keycaps may be partially transparent, which would allow keys to light up by way of a light source built into the keyboard housing or device. In another iteration of the patent application, the circuitry module of the keystack could include a capacitive sensor for sensing single or Multi Touch gestures provided by a user on each key, or even provide haptic feedback to a user, so that keys could provide increased resistance or a vibration when pressed.

Seeing as Apple makes hundreds of patent applications each year, and not all make it through to a finished product, there is no guarantee that this smart keyboard will be making it into a Mac near you in the immediate future. I certainly hope it does, though.