iOS 8’s Handoff feature looks totally rad. Imagine starting off a task on your Mac and then being able to continue where you left off on your iPhone or iPad without waiting. Just pick up the device and everything has already synced.

But wait! There’s no need to imagine this, because you can already do it right now, and you don’t even need iCloud. Handoff looks truly useful, and will blur the lines between our devices more than ever before, but let’s take a look at some apps that already work seamlessly between platforms.

iCloud makes a lot of magic possible on Apple devices, but it’s not the only way to get things synced. Below are five apps that use their own methods to sync data seamlessly, plus one that “syncs” manually but is so good you will wonder why you ever needed a wire. 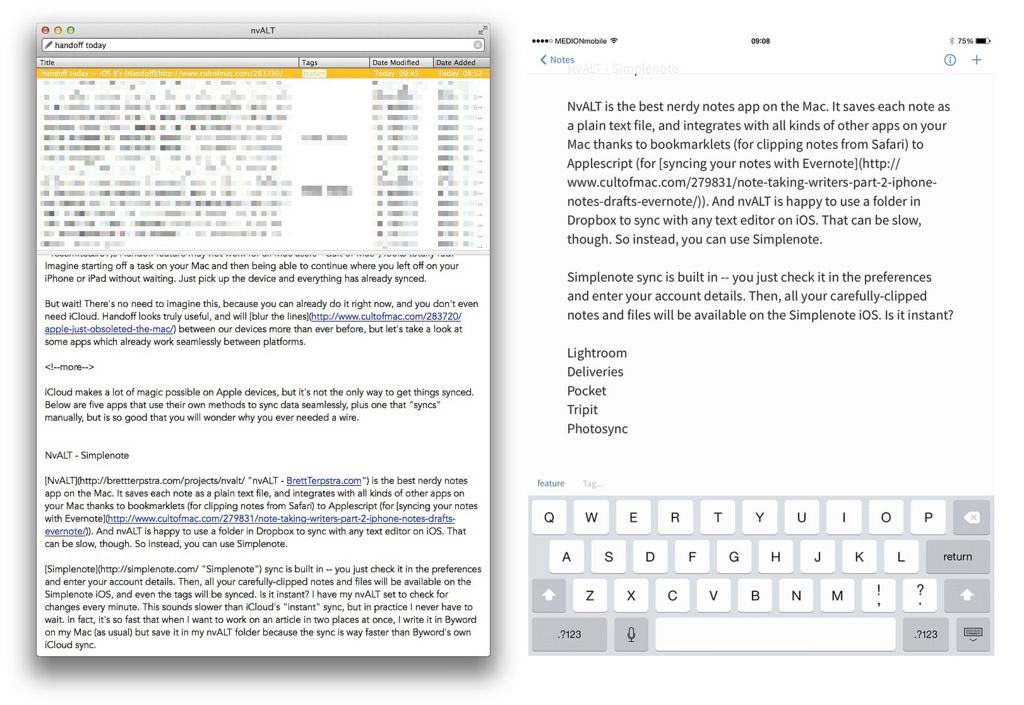 nvALT is the best nerdy notes app on the Mac. It saves each note as a plain text file, and integrates with all kinds of other apps on your Mac thanks to bookmarklets (for clipping notes from Safari) and ApplesSript (for syncing your notes with Evernote). And nvALT is happy to use a folder in Dropbox to sync with any text editor on iOS. That can be slow, though. So instead, you can use Simplenote.

Simplenote sync is built in – you just check it in the preferences and enter your account details. Then, all your carefully clipped notes and files will be available on the Simplenote iOS app, and even the tags will be synced. Is it instant? I have my nvALT set to check for changes every minute. This sounds slower than iCloud’s “instant” sync, but in practice I never have to wait. In fact, it’s so fast that when I want to work on an article in two places at once, I write it in Byword on my Mac (as usual) but save it in my nvALT folder because the sync is way faster than Byword’s own iCloud sync.

Lightroom Mobile syncs your photos on all your iOS devices and your Mac, and it syncs all the edits in double-quick time, too. The pictures themselves sync pretty quickly, with desktop-resident RAW files turned into miniaturized Smart Previews that weigh just a megabyte or two before syncing to your iPad or iPhone. But the most amazing part is the speed at which your edits will sync.

Because all versions of Lightroom use the same RAW photo-rendering engine, Adobe only needs to sync a tiny XML text file to keep your edits in sync. That means that even a huge change on the Mac will appear almost instantly on the iPad, even over 3G. Lightroom mobile wins again because you get unlimited online storage for your synced photos, plus auto-import of your iPhone’s Camera Roll.

This is a specialist app, and it even uses a Dashboard widget on the Mac (remember those?!). Delivery Status from Junecloud is a service that tracks your parcels for you, all in one place. Not only is it the slickest and best-looking of all the package-tracker apps I’ve tried, it’s the most useful. For starters, you can just forward an email containing tracking info and it will add it to the app. And if you open the iOS app with a tracking number on the clipboard, it will offer to import it for you.

I get a lot of packages as the Cult of Mac reviews ed, so this is pretty useful. The best part is that Junecloud’s sync pushes background updates. That is, I can add a new delivery on my Mac and I will start getting push updates on my iPhone without having to launch the app to sync it first. It’s rock solid and I love it. 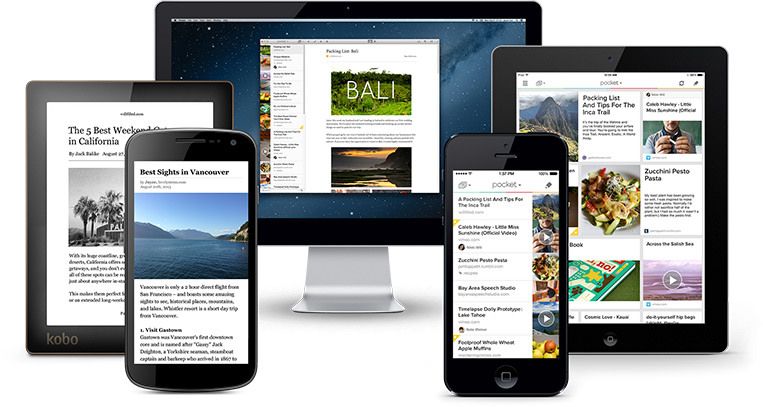 Instapaper might have awesome typography and that great new highlights feature, but when it comes to read-later apps, the nicer-looking Pocket wins because it has the best crap-stripping engine and an always-up-to-date background sync.

Instapaper uses old-fashioned location-based sync to stay up-to-date in the background, living like it was still 2012. Pocket not only offers proper iOS 7 background sync, but it is blazing fast. If I save an article to Pocket using something like theMr Reader app, or the bookmarklet on, say, my iPhone, and then I launch Pocket on my iPad, the article is already there, synced and ready to go. This means my iPad is full of the latest content even when I’m offline. And even better, now that I use the Kobo e-reader, my saved articles are synced there too. Try that with Apple’s Handoff. 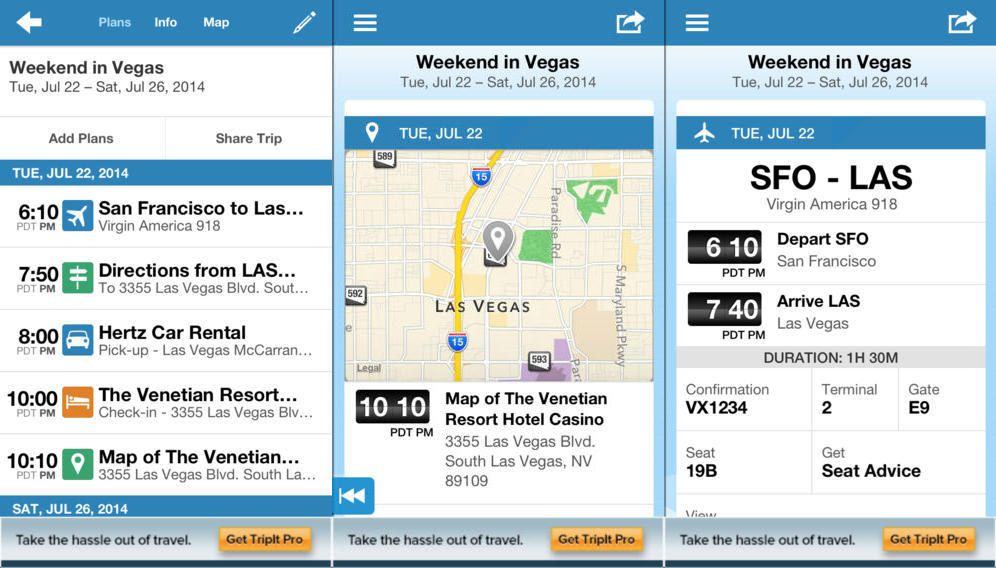 TripIt is like Delivery Status, only for when you’re delivering yourself via airmail. You forward your email flight confirmations to plans@tripit.com, and they show up instantly in the iOS app, or in the browser. If you grant it access to your email inbox, it will automatically retrieve your flight plans.

The best part of this is that TripIt already knows how to read the mess of information in those emails, so no matter which airline you’re using, it will parse out the flight numbers, times and places, then arrange them into its neat, card-based planner app.

The service even gives terminal information and maps, and you can share your travel planes with other Tripit users as well as regular folks. It’s indispensable even if you only fly a couple times a year.

PhotoSync doesn’t actually sync, not automatically anyway. It’s a universal app that also runs on Mac and Windows, and exists to transfer photos from here to there. It can upload to pretty much any cloud service you could think of, but today we’re interested in the iOS-Mac-iOS “sync.”

You can use Photo Stream to copy pictures between devices, but it’s slow, temperamental and you never know whether you got a full-res version of the file. With PhotoSync you always get the original picture, and you can transfer images with a single (long) tap of a button (after selecting the pics you want to send).

In more manual use, all other instances of PhotoSync on your network will show up as destinations. And if you’’re not on Wi-Fi? No worries. It auto-detects other devices over Bluetooth, no pairing required. It really is a magic app. In fact, the only time I plug an iPhone in and use Image Capture and a wire instead is when I’m writing a how-to article and I need to keep grabbing screenshots without switching to another app to transfer them.

Handoff will probably change the way we use our mobile devices, but as you can see, there are plenty of folks already using their own cloud services to provide seamless integration between the desktop and mobile. These are just a few of my favorites. If Handoff is anywhere near as slick as these, we’re in for a treat come fall.