The recently revealed exploit that allows anyone to bypass the iPhone’s Activation Lock system is a rather simple process that requires adding just a single line of code to a computer running iTunes.

The exploit, which is called DoulCi (“iCloud” backward), has already been used thousands of times on locked iPhones and iPads around the world. It’s the work of a pair of anonymous hackers, who cracked Apple’s theft-deterrent measure by tricking lost or stolen iOS devices into thinking they are being reactivated by Apple’s servers.

Introduced in iOS 7, Activation Lock is designed to render a lost or stolen iPhone useless unless it is recovered by its proper owner. It’s a powerful tool designed to help protect iPhone owners who fall victim to street thieves who find Apple products irresistible. When Apple’s Find My Phone app is turned on, an iDevice can be tracked by its owner through iCloud.com and remotely wiped if necessary.

Say a thief snatches an iPhone, it gets remotely wiped by the owner, and the thief attempts to restore the iPhone so it can be used again as a new device. That’s when Activation Lock comes into play. During the setup process after a restore, the Apple ID and password originally associated with the device needs to be entered. If that login info can’t be provided, the iPhone can’t be reactivated with Apple’s iCloud servers. You have a bricked iPhone that can’t get past the initial setup. All it’s good for is spare parts.

By performing what is commonly referred to as a man-in-the-middle attack, the DoulCi exploit intercepts web traffic between the iPhone and Apple’s servers.

1) The first step is to edit your computer’s hosts file and add a line of code that points to DoulCi’s server. The IP address of DoulCi’s server, 188.226.251.76, is simply copied and pasted at the bottom of the hosts file, like so: 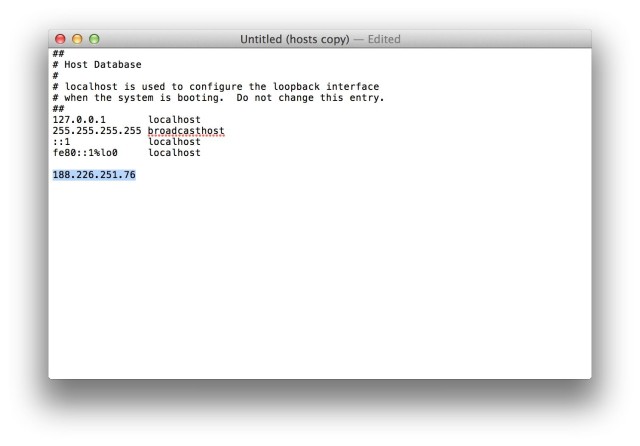 3) This is where things get shady. When the device attempts to contact Apple’s server to see if it needs to be activated, the line added to the hosts file reroutes the ping through DoulCi’s servers instead. The iPhone thinks it’s talking to Apple when it’s really talking to the hackers’ server.

The iPhone thinks it’s talking to Apple when it’s really talking to DoulCi.

At this point, the hackers running DoulCi’s servers could capture device info, such as serial numbers and other unique identifiers. However, security researcher and iOS hacker Steven De Franco told Cult of Mac that no credit card or other personal information tied to the original owner can be swiped. “Unless they have access to Apple’s database, they can’t do much,” he said. “Even then … I think the most they could pull up is billing info.” Besides, if the device being unlocked was stolen in the first place, the person using the exploit likely doesn’t care about sharing its serial number with a mysterious server.

4) After the DoulCi servers have spoofed the activation request, the iPhone is good to go as though it has been authenticated with the owner’s Apple ID login. Sort of…

The catch is that after the exploit, the iPhone’s SIM card won’t be recognized. The SIM is blocked because iOS has been tricked into thinking it has been activated, while the iPhone’s baseband (the firmware that communicates and authenticates the device with the carrier) has not. The iPhone won’t connect to a wireless carrier but can be used for all other functions.

The hackers behind DoulCi told Cult of Mac their technique works on all iOS devices. They claim to have a fix for the SIM-blocking issue in the works.

Apple has not responded to Cult of Mac’s requests for comment.