When your girlfriend grabs the iPad and won’t give it back, you know you’ve got a hit game in your hands. Well, her hands. Seriously, I had to arm-wrestle her to get the iPad back so I could do this review.

Demons vs Fairyland seems at first glance to be yet another cute, fixed-path tower defense game with free-to-play in-app purchases, but the sheer breadth of options available to upgrade your tower defenses, along with the adorably cute artwork and epic music, take this game to a whole new level of awesome.

But seriously, she still won’t give the iPad back.

Tower defense is a fairly saturated genre in the games category on the iTunes App Store, with everyone and their mother publishing 10-best lists on the game type for years. Yet it continues to have a strong draw; anything new will get considerable attention from gamers hungry for more of the zen-like zone you can get into while playing and both macro- and micromanaging your towers and other defenses.

The team that made this game told Cult of Mac they love the wide appeal of tower defense games.

“We started designing Demons vs Fairyland with the idea of making our dream tower defense game, one that has all the things we would want to play ourselves,” said Isabelle Cohen from developer StormAlligator.

The basic mechanics in Demons vs Fairyland are just as satisfying as other similar tower defense games like Kingdom Rush (by the same publisher, Armor Games) or Fieldrunners (Subatomic Studios). You’ve got several levels, each with its own twist on a fixed-path map. Fairyland creeps of varying strengths and speeds will make their way down these lanes toward your base, which in this game is a group of children that the Fairyland folks want to steal away.

Here’s where things get a little different. It’s your job as the Demons to protect the children by placing spawning structures like the cemetery, archery school and energy well, which will each then allow you to place your towers in defined spaces. In the typical tower defense game, you’ll just need to worry about the type of tower you’re placing — ranged damage, slow down, melee damage, and the like — and then upgrade them from there. Demons vs Fairyland allows an even greater flexibility in strategies in the way it forces you to choose where to put these tower spawning structures.

“Demons vs Fairyland includes a puzzle-solving dimension not seen in other tower defense games,” said Cohen in an email. “A good example of this is that not all towers deal damage. The support towers that occupy 4 tiles of the game determine where you can place offensive towers. You can only place Watchtowers (damage-dealing towers) in the range of the Archer School (support tower). Players really need to think hard about where to place those support towers, they occupy a lot of space and it can be hard to optimize correctly with the limited ground to build on.”

The damage-dealing towers can upgrade as in most games of this ilk, but there are also support structures that will increase your towers’ abilities, as long as the building’s area of influence touches your damage towers. Every baddie you kill gives you gold, which is then spent on more towers, or upgrading the ones you have.

You’ll also get a bunch of special damage spells, including a Zombie that spawns up from the ground and chain lightning that does damage to enemy troops in a zig-zaggy line. These spells cost mana, which regenerates over time. 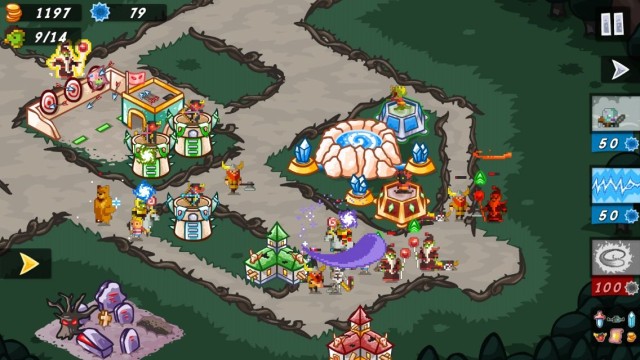 The game has in-app purchases, for sure, but you can also earn every bit of your candy, the in-game currency that can be spent to upgrade all sorts of tower and support structure abilities, along with a fairly extensive skill-tree-type system which will keep you engaged figuring out for quite some time. The team really wanted to make a paid game with a ton of content, and not force players into artificial monetizing schemes.

“We’re big fans of free-to-play when the pay mechanics don’t interfere or prohibit the player from having a fun experience,” said publisher Armor Games’ Daniel McNeely. “Demons vs Fairyland wasn’t designed with that model in mind; we chose to go the paid route.”

The artwork is super twee, with little pixelated tower dudes and enemies prancing around on top of cel-shaded backgrounds. The public relations team even went so far as to commission special pixellated characters to send to reviewers ahead of launch, created by HibouDesigns. If you like the one in our lead image above, be sure to visit her Etsy page and buy yourself some of her other adorable cloth artwork.

If you’ve been craving a tower defense game that you can sink your teeth into, Demons vs Fairyland is a solid entry in a crowded field of similar games. It manages to stand head and shoulders above most due to its clever, deep strategy mechanics and beautifully designed environments, not to mention it’s stirring soundtrack. Give this one a try as soon as you can.

Now, if you’ll excuse me, I need to go pry the iPad out of my girlfriend’s hands again.