When it comes to getting sued over U.S. patent infringements, no one gets targeted more than Apple.

A new study from legal analytics firm Lex Machina found that in 2013 Apple was the most frequent target of patent lawsuits, followed by Amazon at No. 2, as both companies came under heavy fire from a group of 10 “patent monetization entities” that were responsible for a staggering 13 percent of the 6,092 patent-infringement suits filed last year.

Here’s a breakdown of the top 10 most-sued companies: 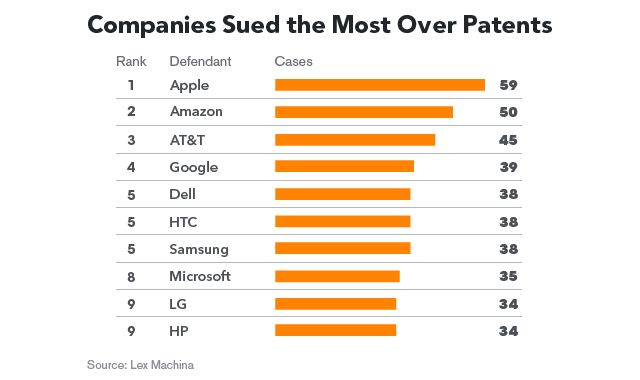 The U.S. patent system has become a hot topic in tech as companies like Google have pressured lawmakers for changes that would discourage patent owners from using the high cost of litigation to scare companies into quick settlements.

The 12 percent rise in patent lawsuits since 2012 (5,418 versus 6,092) hasn’t alarmed everyone, though, as Apple and Microsoft have warned that making too many changes could hurt the economy by removing top tech companies’ ability to protect products from being copied.

Apple’s thermonuclear war against Samsung has painted Cupertino as one of the most litigious bullies in Silicon Valley. But when it comes to suing the pants off companies, Apple doesn’t even rank in the top 10. That title goes to Luxembourg-based ArrivalStar, which filed 137 lawsuits last year and would have posted more if it hadn’t promised to stop demanding royalties from municipal transit agencies last June. 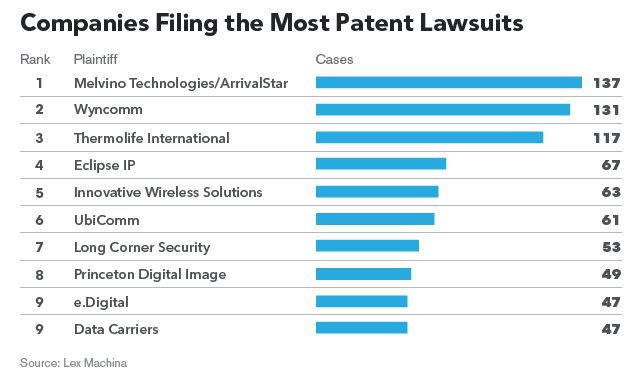 Number of comments on this postLeave a comment
Posted in: News Tagged: Amazon, Google, Microsoft, patents