I have at least three apps set to auto-upload my iPhone photos whenever I reach a Wi-Fi connection. That’s three apps running in the background and using bandwidth to send my pictures up to the cloud, and they all run in addition to Apple’s own Photo Stream.

There’s nothing really wrong with this system: After all, bandwidth over Wi-Fi isn’t limited, and redundancy is good. But what if you could somehow consolidate all these services, and at the same save all your iPhone photos to a folder on your Mac? That’s what we’ll do today, with PhotoStream2Folder and a few other apps. We’ll take your Photo Stream, grab all the photos and save them to a folder on your Mac, then auto-upload them to Flickr, Dropbox and anywhere else you want.

PhotoStream2Folder is a Mac app that watches your Photo Stream and copies the photos to any place you like. It takes the place of iPhoto or Aperture on your Mac, replacing those horrible, slow and bloated apps with a little menu bar utility that monitors the Photo Stream and periodically grabs the latest pictures and saves them to a folder of your choice. The advantage: You can then organize these pictures any way you like. So let’s get set up.

First, you’ll need iPhoto or Aperture. Sorry! Hopefully you’ll have a version knocking around somewhere, as you’ll need it to first set up your Photo Stream. It appears that there’s still no way to do this without one of Apple’s photo apps. With either app installed, you should go to the iCloud preferences in System Preferences and switch on the Photo Stream: 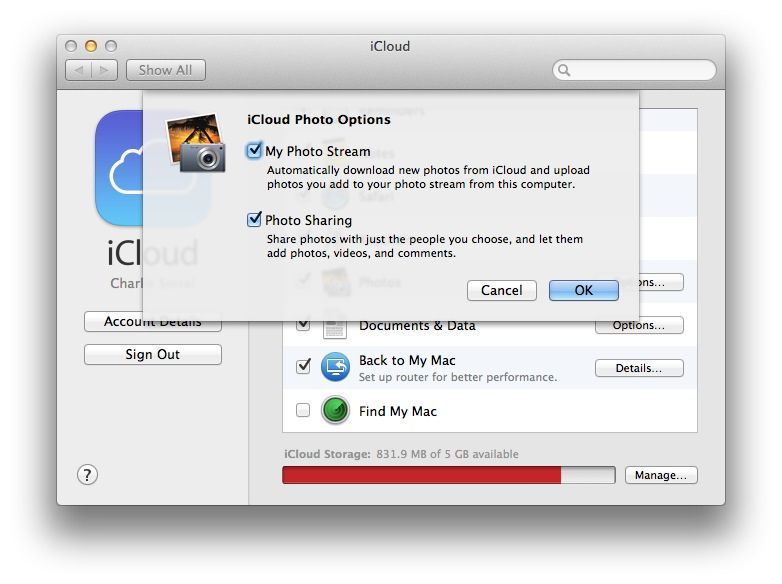 You can then open iPhoto to make sure it’s all working. Apple has full instructions on how to do this. Now, delete iPhoto. It’s done its part, which was to create this folder in your ~/Library folder: 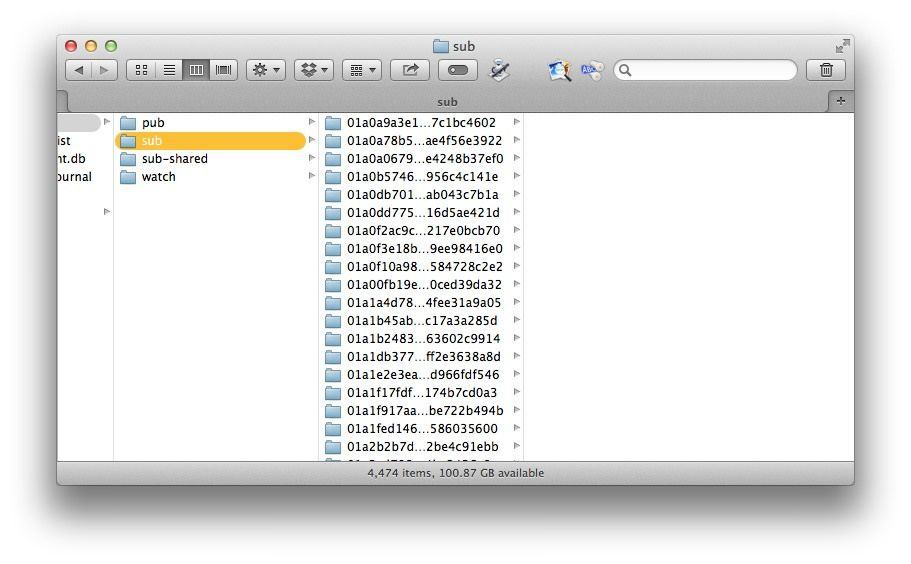 LOL. Also, dickering with this folder could cause problems with your Photo Stream. PhotoStream2Folder just watches this folder for new photos and copies them to the location of your choice. 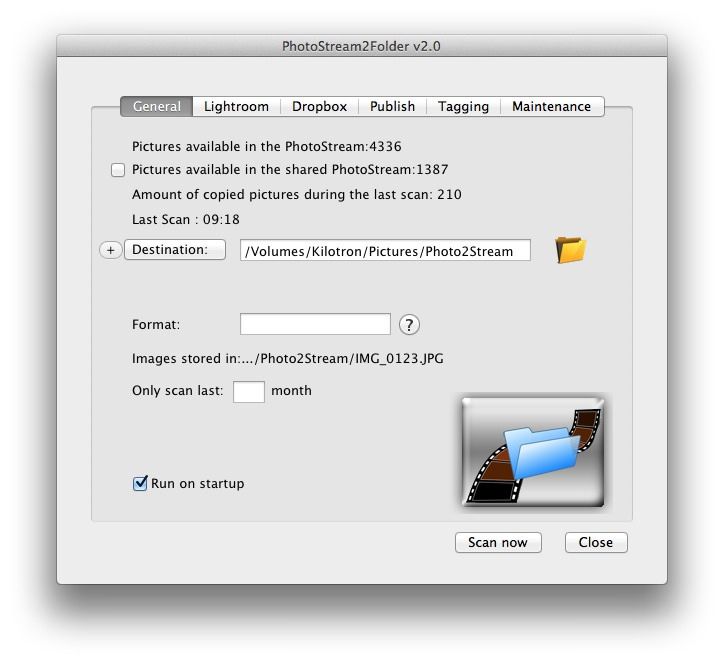 I have mine set to copy to an external drive, but you could pick anywhere, including a Dropbox folder (more on this in a second). There are lots of options here for file renaming and auto-filing into subfolders, all of which can have their names generated on the fly. I keep it simple, dumping everything into one folder and using original file names. The app can be set to import pictures from shared photo streams. This is pretty handy, becasue you can then delete/unsubscribe from those streams on your iPhone to save space. PhotoStream2Folder can also add tags to the pictures as they are sucked in. I have mine set to add the tag “photostream,” just so I can keep track of the pictures if I ever need to, and to add location tags: 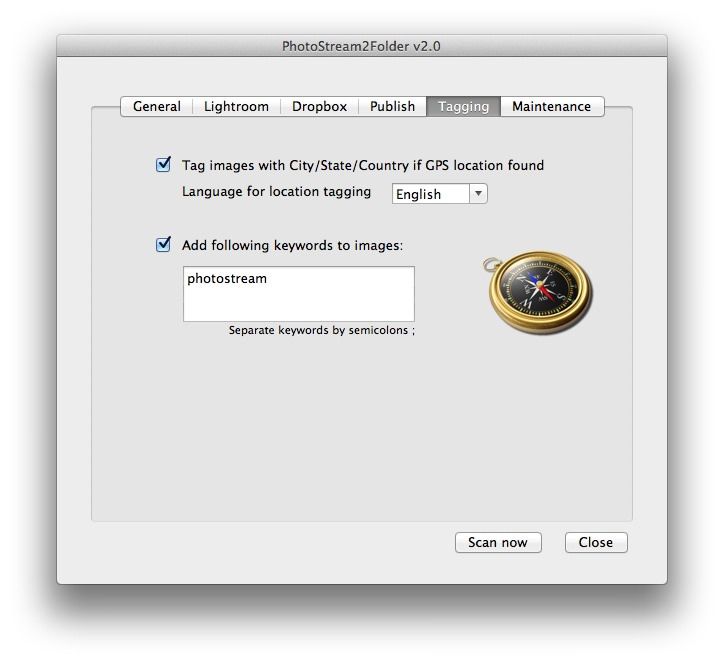 This uses the GPS info in your pictures to look up the location where the image was captured, then writes the city, state and country names into the EXIF tags. This lets you do neat things like this: 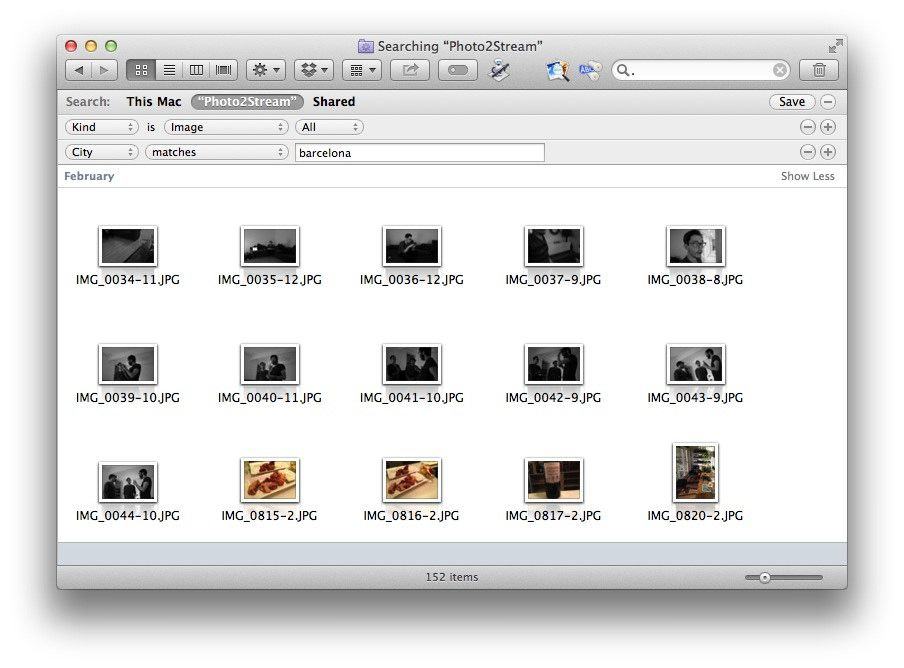 That’s a Spotlight search showing all photos taken in Barcelona. You could also search by country or add in various other criteria – all flash photos taken in either Spain or Germany, for example. If you save these searches as Smart Folders, you have a powerful way to organize your pictures, right there in the Finder.

Adding Dropbox to the mix

Next up is Dropbox integration. This is as easy as choosing a Dropbox folder and setting it as PhotoStream2Folder’s target folder. Your Camera Uploads folder is as good a place as any. And here’s where the neat file- and folder-renaming features come in handy, letting you save the pictures into a sensible folder structure for easy Dropbox browsing. The only other thing you ned to know if you’re using Dropbox is that you can tell PhotoStream2Folder to limit the size of the folder it uses. If the folder threatens to exceed the limit you specify, then PhotoStream2Folder will stop copying new pictures or start deleting old ones. 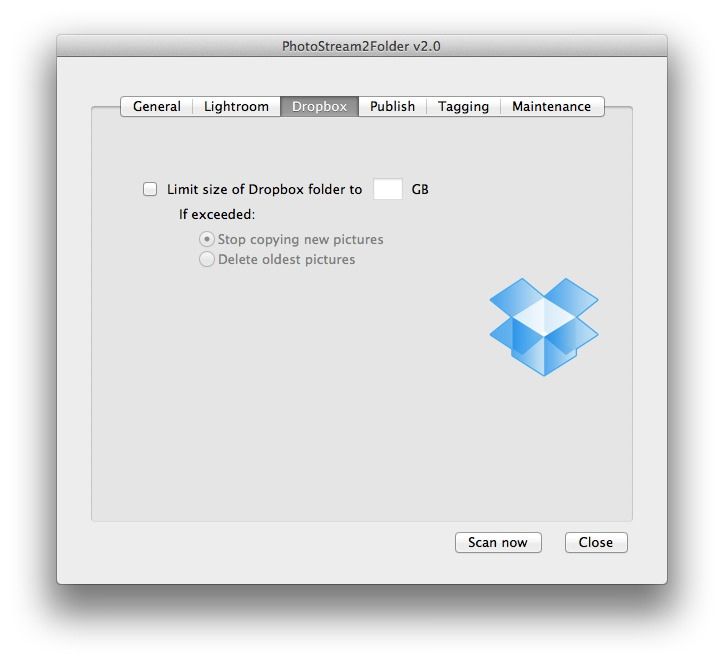 I don’t like either option, so I keep this switched off. Then again, my Dropbox has around 130GB so I’m not too worried about filling it up. If all you want is the last 2GB of your pictures available in your Dropbox Carousel, then this could be ideal.

Flickr’s iOS app is so good at uploading my pictures I just use that, but this is another option — and it’s a great one. Download Uppr, a Mac app for uploading photos to Flickr. Uppr is my favorite way to get photos up to Flickr, mostly because it is a) highly configurable and b) set and forget. Here’ how to do it for your PhotoStream2Folder folder. First, click the little plus in Uppr’s main window. Then browse to your PhotoStream2Folder target folder. Then set the options you want. I’d go for Private (so I can choose which pictures to share later) and maybe put in a tag to remind me where they came from. That’s it. Now Uppr will auto-upload any photos that arrive in that folder, creating an automatic bridge between your iOS Photo Stream and your Flickr account.

As you can see, once the photos are on your Mac in a folder, you can do whatever you like with them. And if you still want to use iPhoto or Aperture, that’s no problem. Because PhotoStream2Folder only copies the photos, you can keep on using iPhoto to do what it does best: Spin up your Mac’s fans, display the spinning beach ball of death and incessantly index your pictures for faces.

I’m just about to move my PhotoStream2Folder target folder onto my Transporter !cultofmac so I can have access to all these photos wherever I am, and also as a neat backup. There are many possibilities, and PhotoStream2Folder even has a built-in viewer for your pictures (seen at the top of this post).

A final example? I have a Smart Folder saved in the Finder sidebar to show me my JPG Photo Stream pictures from the last week. It’s a super-quick way to access my most recent iPhone and iPad photos.

If you have any questions, or neat ideas on what else to do with this setup, find me on Twitter.