Next time some jerk mimes playing the world’s smallest violin at something you said, just whip out the miniscule Fretpen guitar, bellow something defiantly rock-themed at them, and relish in their stunned silence as you headbang triumphantly while shredding your way through Van Halen’s Eruption!

Yes, I see how it may seem as if I’ve let my rock fantasy get a little out of hand. But I strenuously maintain it’s completely appropriate when introduced to the FretPen, a tiny-yet-playable guitar that connects to an accompanying app on the iPhone via low-energy Bluetooth, then rocks out with customizable effects.

This thing’s sort of a real guitar: steel frets, a (as in one) real guitar string — even a maple fretboard. To make up for its tiny-ness and lack of strings, the FretPen’s body hides four small buttons that shift the scale around on the companion app. The app itself is pretty sophisticated, with two tones (electric or acoustic), preset effects, a metronome and a mode that lets you learn how to play.

And yeah, it’s also a pen. But try getting any work done with a freaking guitar in your hand.

The FretPen is currently at $119 on Kickstarter. 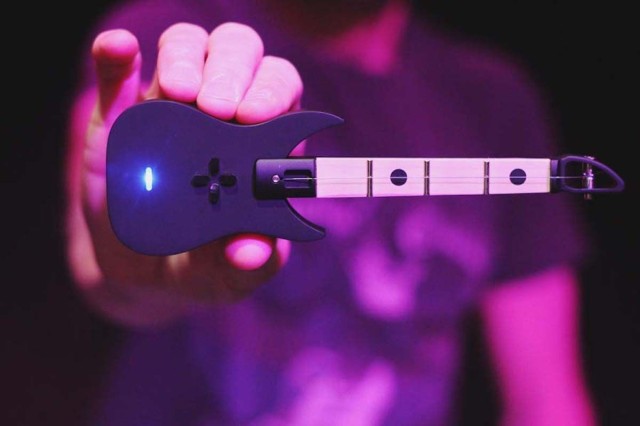