Photography, magic and music-making. Like the iPod before it, iPhone is becoming a cultural icon with creative innovators exploring unusual diversions for the device.

Multimedia magician Marco Tempest (he’s on TV with his ‘Virtual Magician’ series in 52 countries) was an early mover. He created a video which appeared to be software running on an iPhone and queued for ten hours to buy one the day it launched in the US. Within ten minutes he’d installed the clip, which he used to entertain the crowd with a series of illusions.

Among other visual tricks, this made it appear the device was being used as an X-ray machine and an electric razor. Watch the amazing video:

More about Marco, after the jump.

“I’ve been performing magic with mobiles for about six years now. I like to utilize whatever the latest phone technologies are. The iPhone will definitely have its special place in my arsenal,” Tempest said.

“The excitement and myth surrounding the iPhone launch was the perfect platform to blur the lines of reality,” he explains.

But has the device acquired its own cultural significance? Well, yes, according to the magician: “It’s a classic and a meme. It will spark the creation of a lot of other interesting mobile phone concepts as the rest of the industry is now doomed to focus all its research on creating an “iPhone-killer”.

Apple’s phone takes a lot of stick for the quality of its built-in 2-megapixel camera. That didn’t stopGreg Schmigel, from beginning his new street photography project. For the past year, Schmigel has been using his iPhone to take pictures – everyday images taken on city streets across the world.

“I love to compose images, capture them and share them with anyone who might find my work interesting.  I love to share just what I see on any given day. These aren’t heavily-lit studio sessions, nor are there multiple lenses involved. It’s just what I see, take it or leave it.” 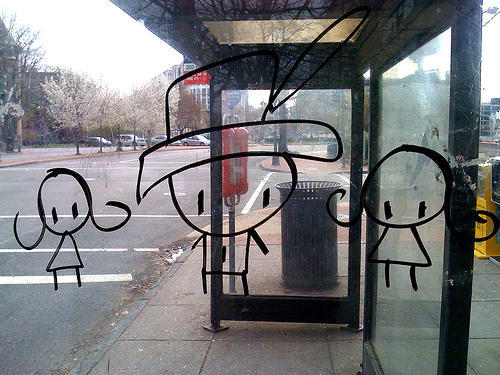 He’s captured unusual graffitti, intimate portraits, all the sights and sounds of the urban hub. “Since purchasing my iPhone the bigger cameras have begun to collect serious dust,” he explains. And it’s not just the cameras, “I must have had four or five different phones;none compared at all to the iPhone,” he explained.

Once he has an image captured, the photographer uploads it immediately to his website via his Flickr account. He likes the immediacy: “One minute I’m shooting on the street, the next the shots are live and online.”

The unobtrusiveness of using his phone to take pictures helps the photographer capture life at its most intimate. “The discretion the iPhone allows you to have when shooting is an advantage in my work.  I’m a huge admirer of street photography, having the iPhone in the palm of your hand, ready to shoot at will is so much more intimate than lugging out the Canon EOS 40D and having the whole world know what you’re up too.”

Ultimately, it’s not megapixels of face recognition technology which creates art, but an eye for an image. “It reminds me of the old plastic cameras from back in the 70’s and 80’s.  You don’t have a whole lot to work with, so you have to work with what you do have.  Creativity – the camera doesn’t shoot the shot.  Don’t be afraid to stop and shoot the small stuff. It’s out there. Just shoot what you see, if that’s what your into. You have to rely more on you as a person than the technology (or lack of it) in the iPhone’s camera system. You need to be more creative with composition, colour, and so on,”  says Schmigel.

It is worth noting iPhone offers more processor power and drive capacity than the original iMac, meaning users have a heap of computer power with them in their pocket.

Naturally, there’s an iPhone band – iBand are three Vienna-based musicians (who only use their first names, Marina, Seb and Roger) who make music with their jailbroken iPhones. A jailbroken iPhone can be used to run all manner of applications. In this case a range of music creation apps from MooCowMusic, at that time made available only to jailbroken phones.

The three began music-making using an iPhone as an experiment, but the project quickly attracted media attention, making them well known in their own country. “I’d say we’re more experimental artists than experimental musicians. We just love to make music and we are interested in pushing the limits of the iPhone,” explained band member, Seb.

“We thought about forming this iPhone band since the possibilities of the device as a programmable, customizable platform became obvious with the first wave of third-party applications.” The band got serious with their idea when MooCowMusic’s Mark Terry released the first independent piano application. The band released their first demo on YouTube, which has generated in excess of three million views so far.

More than just a mobile platform, the iPhone has already ignited an unusual new trend of creativity – can other phone vendors match this achievement?