I’m all for getting my stuff into iTunes more efficiently, aren’t you? Jordan Merrick is, too, and he’s come up with a brilliant way to do just that. He’s also got a great site full of clever tips there as well. Really, go check it out.

The default way, says Merrick, for media to get to iTunes is like this: drag and drop a folder full of music or a video you’ve converted from DVD to iTunes. iTunes takes said media, copies it, and places it into its own special folder structure.

What happens in this case is that you’re left holding two copies of that album or video — one in your iTunes folder and one wherever you pulled it from. That’s kind of silly, if you ask me, especially if you back up regularly. No one needs two copies of anything on their hard drive.

Luckily, there’s a cool folder in your iTunes folder that lets you add stuff directly to iTunes. Sadly, it’s pretty buried, but Merrick will show you a better way.

Open up the Finder, he says, and navigate to the Music folder in your Home folder. Open the iTunes folder, then the iTunes Media folder. You’ll see an folder called Automatically Add to iTunes. Drag this folder over to the sidebar in the Finder for easy access. 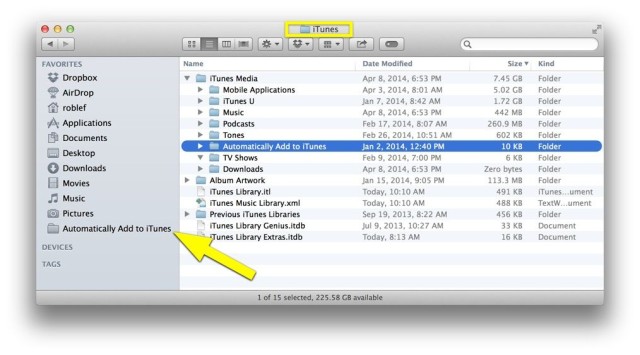 Now, every time you want to put music or video into iTunes, simply drag it over to the sidebar and into the Automatically Add to iTunes folder you’ve placed there. iTunes will then add it to its own system.

If it’s not a file that iTunes can handle, the app will place a folder called Not Added into the Automatically Add to iTunes folder that can clean out later.

If you’re truly a purist, like Merrick is (he hates sidebar items that he can’t fully read), you can skip adding the folder to the sidebar, and instead create a Finder service instead that basically does the same thing as above, just not in a folder that might have too long a name for the sidebar.

The Instructional has a full explanation on how to do just that over at their original post on this topic.