Sometimes you just want an iPhone case that protects that beloved all-encompassing communications and gaming device from the vagaries of your crazy life, for sure.

There are numerous options for those of us who tend to the “drop our gear constantly” school of gadget ownership, but most of them end up being incredibly bulky and difficult to use. Some even provide a screen guard that is less than touchable, as it were.

The Voyager series for the iPhone 5 and 5s, however, aims to provide similar drop, screen, and debris protection as many of these other cases, all for a more affordable price.

I took the case out for a spin to see if it could, in fact, protect my iPhone 5 without trouble, and whether the added bulk is worth the trade off in protection.

What struck me first is the ease of use of the Voyager case. Opening the corner with a quarter or other coin is completely simple, and the case cracks open easily. There are three layers in the Voyager: the front frame, the screen protector, and the back piece, which clicks firmly around my iPhone 5 with a few finger pinches.

The resulting case feels like it can withstand anything, so I dropped my iPhone 5 quite a few times, starting on the carpet, then the hardwood floor, and then the asphalt driveway outside. The case didn’t dent, the iPhone still works, so consider the drop test a raging success.

What really matters, though, is how easily this thing slides into my front right pocket, my carrying position of choice for the iPhone 5. I judge all cases by this simple approach — if it doesn’t fit in my pants, it doesn’t get used. The end. 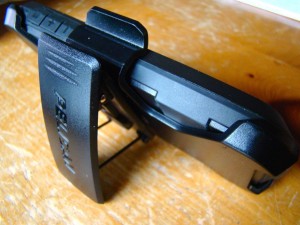 Sure, the Voyager comes with a handy-dandy swiveling belt clip, but really? The late ’90s have come and gone and, like my favorite pair of Crocs, no one is going to wear a belt clipped iPhone 5 unless they’re forced to.

That said, the belt clip works well; it feels strong and springy, like it could cling to my waist all day without letting go of my precious iPhone 5. But, like I said, ugh. I’m not wearing this thing.

Where the belt clip comes in super handy, however, is when you use it as a kickstand. As a frequent flier, I appreciate a useful way to prop up the iPhone 5 on a long flight from Anchorage to the rest of the world (3.5 hours north of Seattle, thank you very much). The belt clip can be pinched open and a little wire metal bit drops down to keep it open, forming the cutest little kickstand ever found on a rugged case like this.

As an aside, the belt clip and holster piece also helps hold the iPhone in one hand, giving you a little extra on the back to grasp onto. So, there’s that.

The Pelican Voyager provides serious protection from drops along with a best-in-class touchscreen protector film.

But oh my the screen protector. Let me be clear — I hate plastic screen films of all stripe, as a general rule, as they obscure the screen and make sure to interfere with as many taps as possible. I detest the things.

Not so with the Pelican Voyager screen protector. It’s a brilliant technology in its own right, with what look like little conductive dots on it in a grid. The screen is as responsive as it ever is without a thick piece of clear plastic over it, so much so that I forgot there was a protector on my iPhone until I take it out in sunlight and see the little dotted grid.

The front frame does interfere a bit with the sides of the screen, unfortunately. Making the icons do the wiggle dance, I had to really focus on sliding apps and folders to the side of the screen to move them a home page over. It can be done, but you really have to push your thumb up against the right or left side of the front frame of the Voyager. I suppose this is a trade-off for the protection the case provides, but I’d think the engineers there could maybe make this work in future iterations. 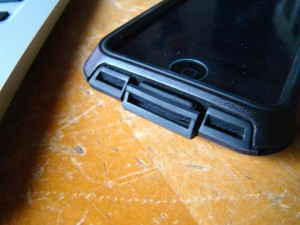 While the rubberized doors over the volume, sleep/wake button, and lightning and headphone ports work well, but might feel a bit too stiff, if you ask me. The lightning port, in particular, is pretty stiff and takes a bit of effort to hold open when connecting your iPhone to charge or sync. Additionally, the dust that seems to accumulate around them is a bit more than other cases I’ve used, possibly due to the stickiness of the rubber used. The camera port in particular, needed a quick wipe each time after taking the iPhone out of my pocket. The dust isn’t getting into the iPhone, though, so that’s a plus.

The feel of the Pelican Voyager case is one of useful solidity. After using a Mophie Space charging case the past couple of weeks, the Voyager felt downright svelte. The rubber around the sides and on the back make sure it stays put, even on my car’s dusty dashboard, and it feels good in the hand for phone calls and Twitter sessions.

Bottom line, is this case worth the $50 suggested retail price? Yes, yes it is. The Pelican Voyager provides serious protection from drops along with a best-in-class touchscreen protector film. It also gives you a belt clip (yick) that doubles as a useful kickstand — all for a price that’s lower than other comparable cases.