Although there is a frenzy of hype and curiosity surrounding Apple’s as-yet unseen tablet, it appears many consumers have a limit on how much they’ll pay to own the near-mythical device: $700. Seven in 10 people surveyed said they would not spend more than that amount for a tablet, according to a consumer research firm.

The amount seems to fall midway between $600 to $800, a figure that Piper Jaffray predicts could be the tablet’s selling point. Wall Street wisdom appears to peg the device at below $1,000. The eventual price tag could be lower if carriers agree to subsidize the cost. Reportedly, Apple is in discussions with AT&T and Verizon on a deal to offer the tablet. 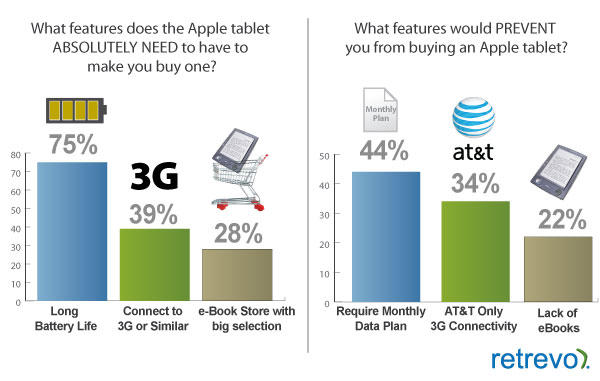 The survey of 500 Retrovo users between Jan. 16 and Jan. 20 also provided a clue to what consumers expect in a tablet. Highest on the most-wanted list is long battery-life, with 75 percent of the survey respondents. Apple may delay shipping the tablet until this summer due to battery issues, one analyst reported earlier this week. Apple reportedly has turned to the same companies that supply MacBook batteries for its tablet.

Other issues determining whether the tablet sells is access to a 3G network. The question of whether Apple will include 3G support or rely on Wi-Fi connection appears still up-in-the-air. If a carrier is included, the price of the tablet could fall dramatically due to subsidies for customers. Interestingly, 44 percent of those surveyed said they would not purchase the tablet if it required a carrier contract. Another 34 percent said if AT&T were the carrier, they’d keep walking.

Although Apple has been busy courting publishers and other content-providers to have material ready for the tablet’s launch, the Retrovo survey found only 22 percent of people would forego the tablet if e-books were not available.

In a similar survey, ChangeWave Research found $500 to $700 was the sweet spot for tablet pricing. The study found 75 percent of consumers would pay $500 or more for the Apple, device, but just 37 percent would pay more than $700.