Look, Legos are for everyone, ok? With the huge success of the latest Lego Movie, it’s clear that playing with the building bricks isn’t just for kids anymore, if it ever was.

If you’ve been in a comic, toy, or hobby shop lately, chances are you’ve seen the little random minifigure bags that you can buy, not knowing exactly which minifigure is contained within, like a mini treasure hunt.

Funcom is banking on this craze with its upcoming release of Lego Minifigures Online for iPad, Android tablets, and PC, hoping to trade on the fact that one of the coolest features of the modern Lego experience is the little people that seem to come with every construction model set sold.

Sadly, there’s no Mac version planned as yet, but the iPad game will play the same as the PC and Android versions, on the same servers.

Cult of Mac saw a preview of Pirate World for Lego Minifigures Online last week at GDC, and we’re finally allowed to post it below.

The new massively multiplayer online game will let you run quests and play with your friends through a variety of Lego-themed worlds like Pirates, Candyland, Underworld, and Space.

You’ll play with a starter set of three minifigures, each with their own special moves and abilities, able to switch between them with a tap on your iPad. As you make your way through the Lego universe, you’ll collect other digital minifigure bags which you can open up in-game, using the resulting little people to help you on your journey. And, if you purchase real analog minifigures in your favorite store, they’ll come with a code that will let you play with that figure in-game.

The game will be free-to-play with micro-transactions, and what you do on your desktop computer will transfer over to your iPad so you never have to be without your progress, even on the go. 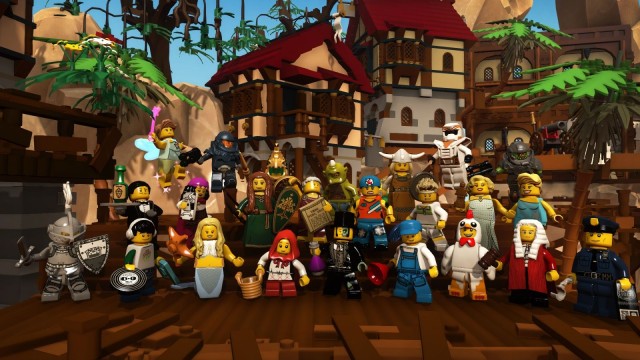 While we weren’t able to play on the iPad version of the game, we did get to sit in on a walkthrough of a pirate-themed quest on a PC. The gameplay was like a clever mix of the Lego games you may be familiar with, like Lego Star Wars or Lego Marvel Heroes, and the MMO formula popularized by games like World of Warcraft.

We ran our minifigures from area to area, clicking on enemies to target and attack, hitting buttons on the keyboard for special attacks and to switch minifigures, building special gizmos to complete our levels, and gathering up quest items and in-game currency. Occasionally, we’d earn a special minifigure, and drop into the collection screen, opening up our new digital baggies with glee.

All in all, it looks to be a delightful way to play with Lego minifigures with our friends from the comfort of our own iPads, PCs or Android tablets. Lego Minifigures Online should launch this fall across the three platforms.