What was your first Tweet? Now you can find out with a cool new tool from Twitter that shows you the first public Tweet of any user. My opus is above, and not as embarrassing as I’d expected.

To use the tool, just follow the link and tap in a user name. That’s it, so without further ado, let’s embarrass the rest of the Cult of Mac morning crew by publishing what they wrote, and seeing who joined Twitter earliest.

Killian joined in 2009, or two years after launch. What a loser.

Luke turned up to the party in 2012, and only then because he was shilling his new book. This, ladies and gentleman, is what Twitter has become.

And here’s the first Tweet from our dear leader, Leander. Back in 2008 he was still on the Wired.com news desk, and clearly using the office internet connection to “edit” “bootlegs,” aka download music.

This post turned out to be way more fun that I thought it would. Who next? Phil Schiller? Sure: 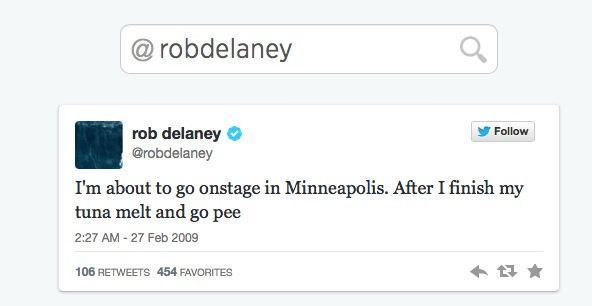 Nothing less than we’d expect.