BlackBerry CEO John Chen recently dismissed iPhone users as “wall huggers” due to his suggestion that they constantly have to hug walls looking for electricity sockets to stop their phones running out of battery midday.

Two patents published Thursday show that Apple is not taking similar criticism lying down, as it actively investigating the possibility of intelligently discerning when, where and how we use our iOS devices — and utilizing this information to tweak performance to prolong battery life.

In one example of how Apple’s patents might be used it suggests that if your iPhone charge typically runs out on Thursdays only, then your different behavior on that day makes it necessary to reconfigure your power management system for that day only. This might mean looking for patterns in behavior to find when a user is unlikely to use their iPhone (when it is put into Airplane Mode, for instance) and sacrificing performance during these periods, knowing that the user is less likely to be using the device at this time.

Conversely, the iPhone can also intelligently learn a user’s workday by looking at which time periods in a day (e.g. 9:00 am to 11:00 am, and 2:00 pm to 4:00 pm, Monday to Friday) full operating power is likely to be required, and conserve battery for these times. 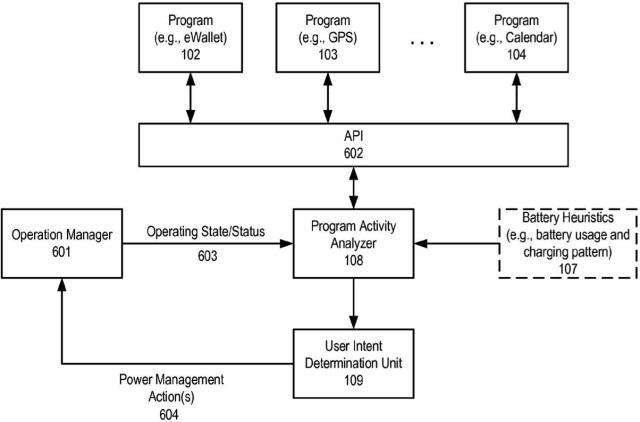 The patents also describe how iOS devices can intelligently discern between convenience charging and necessary charging. If you charge regularly, and the total amount of charge is consistently less than the battery’s capacity, Apple can infer that the user is charging their iPhone because it is convenient (they’re sitting at their desk working, for instance) rather than because they are worried their phone is about to run out of battery. If the charge used in a day regularly exceeds the battery’s capacity, however, Apple can reconfigure the iPhone’s power management system without the user being aware of it to stretch the capacity of the battery and avoid the need to change mid-day.