The LA Unified School District made headlines when it pledged to make it rain iPads on students by spending $1 billion on Apple’s tablets, but teachers are more concerned of the rain leaking through their classroom roofs.

The school district’s initiative is aimed to enhance students educational experience but a number of angry teachers have started a ‘Repairs, Not iPads‘ page on Facebook filled with pictures of everything from rat feces on desks, broken toilets, dead mice, termite infestations, leaky roofs and more, along with a demand that district spend money on much needed repairs before iPads. 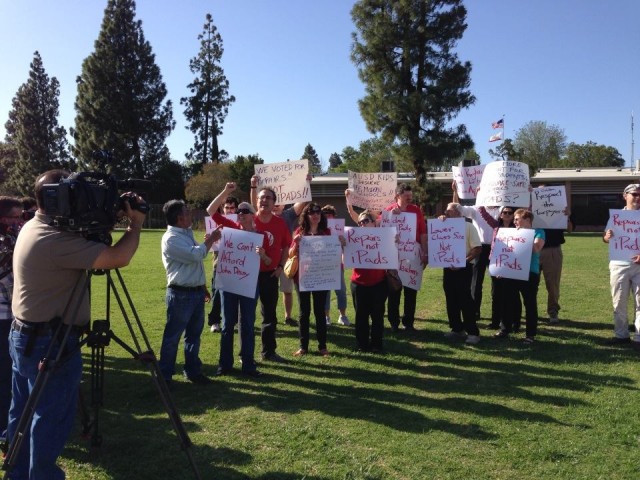 The page was created in December by two teachers and has started grow louder as it aims to be a place for teachers and the community to document neglected school repairs while construction bond money is diverted to purchase iPads.

One former Dorsey High School teacher told NBC LA special education classroom she taught in last year was overflowing with garbage to point it was unsanitary:

“The fact of the matter is, I had students with open tracheas and physical needs and the place was unsanitary. And that was the same year that we also ran out of toilet paper.

It should shine a light on the fact that they are ready to spend (a billion) dollars on iPads while we are asking students to try to learn and teachers to try to teach in conditions that are substandard, subhuman in a lot of ways.”

District officials admit they slashed maintenance staff in half over the last six years, but swear they’re not making a choice between buying iPads or making repairs because they’ve got a fully funded repair plan that’s separate than the $1 billion iPad initiative – even though a fraction of that money couldn’t possibly be diverted to making the iPad Havens cleaner, safer, and more sanitary.