Most of the apps on my iPhone that I would want password protected already are, but what happens when I want an added layer of security? That’s where Asphaleia comes in, a new jailbreak tweak from the same designer behind the Auxo multitasking switcher for iOS 6.

Not only does Asphaleia let you use Touch ID on the iPhone 5s to secure any app, but it adds other important security options to iOS with a level of polish that is unprecedented for a jailbreak tweak of its kind.

While Asphaleia is probably a little overboard in terms of catering to the security paranoia some of us deal with, it’s a good example of improvements Apple could make to Touch ID in the future.

Once you install Asphaleia from Cydia, its preferences are added within the Settings app. The goal of the tweak is to give you more options for using Touch ID while also staying out of the way, which it happens to achieve quite nicely. 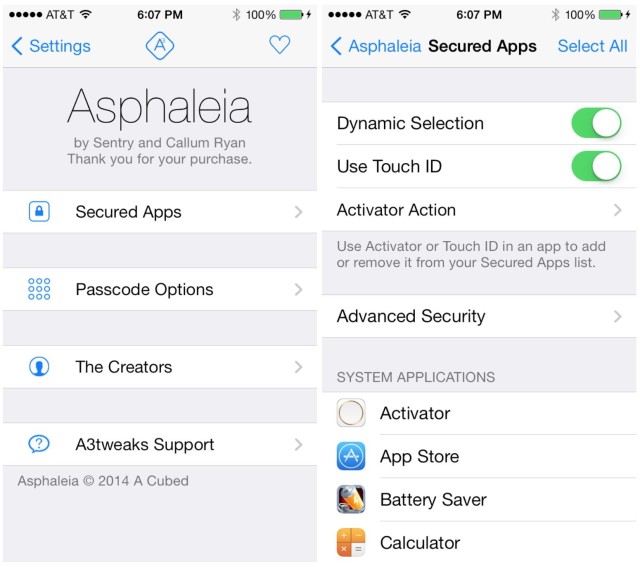 There are a plethora of settings to play with in Asphaleia, but the basic gist of the tweak is that you add apps you want to be secured separately with Touch ID. Apps like Messages or Mail can all of a sudden be protected with your fingerprint. And if you want to add an extra layer of security to apps that already require passwords upon opening, like 1Password, you can do so.

Apps can be added within Asphaleia’s settings or via a quick shortcut anywhere in iOS 7. By default, invoking Touch ID when in an app allows you to add the app to Asphaleia’s list or remove it. When Touch ID is invoked from the home screen, Asphaleia’s gives the options to disable or enable Touch ID security for all apps.

The little details in Asphaleia are what make it a truly impressive tweak. One feature I’m particularly fond of is the ability to require Touch ID authentication before powering off my iPhone. It seems like Apple’s Activation Lock in iOS 7 should already let you do this, but it doesn’t. If someone knows what they’re doing when they steal an iPhone, they’ll power it off immediately to avoid it being tracked by Find My iPhone. Asphaleia can prevent that scenario from happening.

Another feature is the option to disable all app security when you’re on your home WiFi network, which is nice. There are other little adjustments you can make to Asphaleia that I won’t touch on here (See what I did there?), but lets just say that there is no lack of customization. You can even set which individual fingerprints perform certain functions.

Asphaleia has a clean design and rich feature set, which makes it a steal at $2 in Cydia. If you’ve already purchased a competing Touch ID tweak, like BioLockdown or BioProtect, Asphaleia only costs $1.