Take a sheet of letter paper and fold it in half. You’re holding something about the size of Apple’s new iSlate. Imagine that scrap of paper is a beautiful, shiny combination of glass, aluminum and plastic, weighing about 10 ounces. How does it feel?

The first thing you’ll notice is that, unlike the iPhone, you want to hold it with both hands. And this presents a bit of a problem. You don’t have a hand free to touch the screen.Your thumbs are resting on the edges of the device, and are not long enough or manoeuvrable enough to reach the middle. Your fingers, however, are idly stretched across the back of the device.

And this gives us the clue we need to suspect that there’s some truth the rumors doing the rounds that Apple’s working on a multi touch surface for the back of a new iPhone. But perhaps it’s destined for the new tablet, instead (or as well). More than just a gimmick, this all-new input method would enable users to interact with the device without moving their hands from its sides. It also has the benefit of enabling you to use the device without obscuring the screen with your hands. 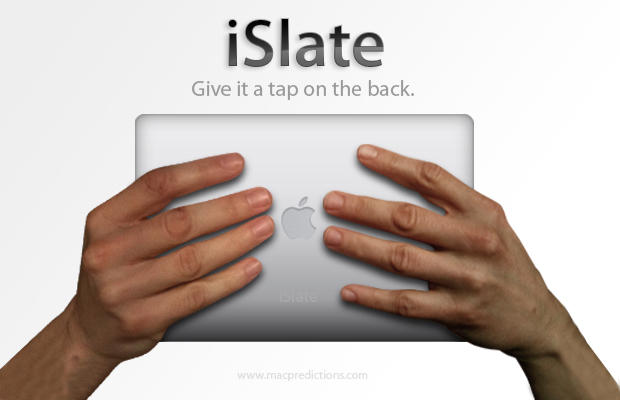 How would it work? Some gestures, such as scrolling and swiping will be easy, because precise positioning is not essential. But what about tapping buttons and entering text? I think the way this will work is that when you tap and hold, a cursor will appear on the screen (or the text magnifying loupe when you’re over text). This will persist until you release your tap, enabling you to be more precise in your positioning before you finish your tap. The cursor icon would probably look like a circle, rather than an arrow – which would be more fitting with the accuracy of a finger, relative to a mouse.

The neat thing about this approach is that it doesn’t require any major changes to the existing input method of the iPhone OS – and so all three devices: iPhone, iPod touch and iSlate, could run on the same system, regardless of whether they have multi touch on the reverse. I’m going to take a guess and say they’ll call this system “Magic Touch.”

While this solution might seem a little too “out there” for a finished product, if you do a little experimenting with that folded over piece of paper, I think you’ll realise that this could work. And your accuracy would be pretty good anyway, because it turns out you can intuitively judge a position on the back, relative something on the front.

There is even a prescident for Apple taking this “front and back” approach in a design. The original iMac G5 had its power button positioned directly behind the power light on its front. In order to hit the power button, you had to grope around the back of the device in order to hit it. But the thing is, you didn’t grope – you intuitively found it, because the power light on the front guides you hand to the spot on the back. Apple’s design team frequently reprises successful concepts from earlier products in this way.

Note: This article is just speculation based upon rumor. The originaltouch sensitive casing rumor was put about by Goldman Sachs analyst Robert Chen, and related to the iPhone, rather than a tablet.