At this year’s Mobile World Congress in Barcelona, Spain, the themes were – as we expected – waterproof phones, smart-watches and NFC (again). Samsung’s new Galaxy S5 was a high-profile example of the waterproof trend, and the company also showed its new Galaxy Gear watch, which looks pretty neat for a giant wrist-screen. And NFC is in every Android handset these days.

But how do these themes relate to the iPhone and iPad? Let’s think about that.

This is something I expect Apple to do sooner rather than later. The company clearly realizes that handheld computers need to be tougher. Gorilla glass protects the screen, sapphire glass covers the camera lens, and the promo video for the iPad Air showed it being dropped and bouncing off the floor without any ill effects. But none of those help you at the beach, or even if you put your iPhone down on a wet spot on the kitchen counter. Let alone watersports or dropping it in the toilet (an amusingly common disaster).

Will the iPhone 6 or the iPad Air 2 be waterproof? Who knows? But I would bet on at least a good deal of water-resistance coming sooner rather than later. After all, this is clearly an essential feature whose time is here. 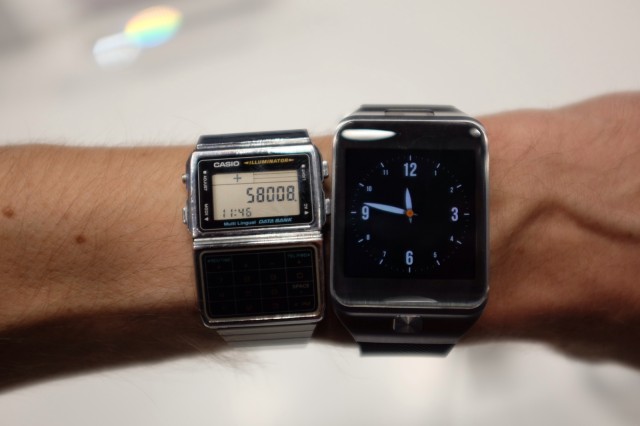 Most of the Smart Watches I checked out seemed like nothing more than the last-gen iPod Nano with a strap. And in fact, if you added a strap and Bluetooth to the Nano, then you’d have a great Smart Watch – the latest non-wrist-friendly Nano already has Bluetooth for audio, and now that Bluetooth low-energy would let it connect to your iPhone constantly without any real affect on battery life, Apple may just go this route.

The big question is why? Why make one when you already have an iPhone in your pocket? Who would buy it? I have a terrible history of predicting Apple hardware, but it seems to me that the iWatch will be a fitness device containing the M7 MoCoPro. Apple usually tests out the features of upcoming products out in the open (nothing in the original iPad was new apart from the form factor), and the M7 always seemed like an oddball addition to the current lineup of iDevices.

My guess is that it’s in the iPhone and iPad for testing and calibration purposes,and that the iWatch will be a cross between an iPod and a fitness tracker, only it’ll have some Apple magic that’ll make it better than both.

Don’t hold your breath. NFC might be everywhere, in every phone, but remember when people said Apple had to make a netbook because everybody was doing that?

Again, all the clues are there. iBeacons, AirDrop phone-to-phone transfers, low-power Bluetooth, fingerprint scanners for authentication, and a gazillion iTunes accounts all with credit cards tied to them. It seems pretty clear what Apple has planned here. Hell, even the tap-to-setup gimmick for the AppleTV is similar to NFC tap-to-pair functionality.

What about the rollout of compatible hardware in physical stores? It’s already done. Retailers can use iPod Touches and iPads as cash registers, and you can use your iPhone and iTunes account to pay. It works in the Apple Stores already. Imagine walking around Trader Joe’s and scanning your own groceries as you go, and then just leaving the store without having to check out.

Why not just use NFC? Because it’s shit, and relies on third parties to get things done. Incipio gave me and a bunch of other journalists its new NFC case for the iPhone to test out this week at the MWC, and nobody I talked to could get theirs to work. Mine worked once, after ten minutes of trying, and even the guy at the Mobile World Congress’s NFC activation desk said that the cases were hit or miss. And Apple doesn’t like spotty experiences like that.

So, the next iPhone could replace your wallet, monitor your health and fitness and be tough enough to take and use anywhere. I’ll take that over 20 Megapixel cameras, 4K video and 600ppi screens.