You know how it is–you never seem to have enough battery power for your iPhone or iPad when you really need it. When I travel, I tend to use my iPhone 5 for everything possible, looking up nearby restaurants and attractions, finding directions to the nearest coffee place, and keeping in touch with friends and co-workers both near and far.

All that usage takes its toll on a mobile device, but you want to stay mobile. There are plenty of extrenal battery solutions out there, from the popular Mophie iPhone cases to less-attached solutions like the ones you can find at Brookstone for about $100.

The Naztech power bank is a surprisingly small external power pack that lets you charge up to five devices at once, including iPhones, iPads, and any other USB-charging devices. It’s a decent size for something with such flexibility, and it has a 10400mAh Lithium-ion battery in it that seemed to hold and deliver plenty of power to my iPad 3, iPad mini, and iPhone 5 while I took a trip to Las Vegas this past weekend. 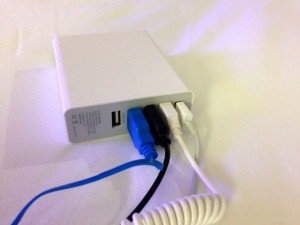 The little white power brick is almost square shaped, and it has five USB ports on the back to plug in your peripherals. There’s a 2.1-amp output port for those thirsty iPads, two 1-amp ports for your iPhone, and two more ports (at 1.3-amp and 0.5-amp) to complete the bank. The warning in the manual says that the power bank will shut down if the total combined output of devices you have connected exceeds 3.1-amps, so you can rest assured that the brick won’t over-power and fry anything.

The front of the power bank has a power button, four LED lights to indicate how much power is left in the bank, and a micro-usb input port to charge the power brick itself. The LED lights display four lights for 75 to 100 percent, three lights for 50 to 75 percent, two for 25 to 50 percent, and one light means you have up to 25 percent left. These are handy to have, as I was able to know when to charge the darn thing.

That said, I was able to fully charge my iPhone and iPad mini with just one charge on the bank; both at once. It’s not just for on the go, either: I set the power bank on the nightstand in my hotel room and plugged it into the wall outlet via mini-USB. It then became a multi-unit charging station for my and my brother’s gadgets, which is a pretty sweet thing to have when you’re dealing with limited wall plug space. 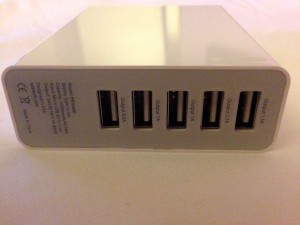 The Naztech Power Bank fits nicely in my backpack, and i was able to plug in both iPads while waiting in the airport terminal, and while on the plane. It’s a great way to make sure that all your stuff is charged when you arrive at your destination, rather than having to search for more than one plug at the airport or hotel.

The unit comes with a grey little carrying bag and several device tips that will fit everything from the 30-pin adapter for older iOS devices to mini and micro USB tips. These interchangeable tips fit on an included curly USB cable, but mainly just used the cables that came with my devices, rather than worry about all those little pieces.

I was able to fully charge my iPhone and iPad mini with just one charge on the bank; both at once.

While charging one too many devices, the power bank did shut off, as advertised, but I wasn’t aware of it. It might be nice to have a red LED or something that lets you know when you’ve overloaded the bank. The brick got a little warm at times, as well, but nothing that would burn anything or anyone.

Bottom line, the Power Bank is a portable, solidly built, and eminently useful device that has earned a permanent space in my travel bags, and will probably go with me to conferences, vacations, and more as I always seem to need just a bit more charge in my many iOS devices. Plus, I can always offer up a port or two to friends and fellow writers as we move from spot to spot, covering all the interesting stuff for you.

This is a great little power solution for a good price at $79.99.

Number of comments on this postLeave a comment
Posted in: Reviews Tagged: battery pack, iphone charging