Apple maintains its position as the world’s most valuable brand for the third year in a row, according to this year’s Brand Finance Global 500 study.

After Apple, the other positions in the Top 10 were filled out by Samsung, Google, Microsoft, Verizon, General Electric, AT&T, Amazon, Walmart, and IBM.

“What sets [Apple] apart is its ability to monetize [its] brand,” Brand Finance CEO David Haigh said in a statement. “For example, though tablets were in use before the iPad, it was the application of the Apple brand to the concept that captured the public imagination and allowed it to take off as a commercial reality.”

While one can take issue with Haigh’s inference that it was simply slapping an Apple logo on the iPad that made it the leading tablet on the market (and not, you know, the device’s quality, support, and iOS ecosystem), it is still interesting that Apple should be able to take the number one spot on the list despite manufacturing relatively few products — certainly in comparison with runner-up Samsung, which makes everything from blenders and dishwashers to tablets and smartphones.

The U.S. had the world’s largest number of valuable brands, with 185 — far ahead of next in line Japan which had 49. 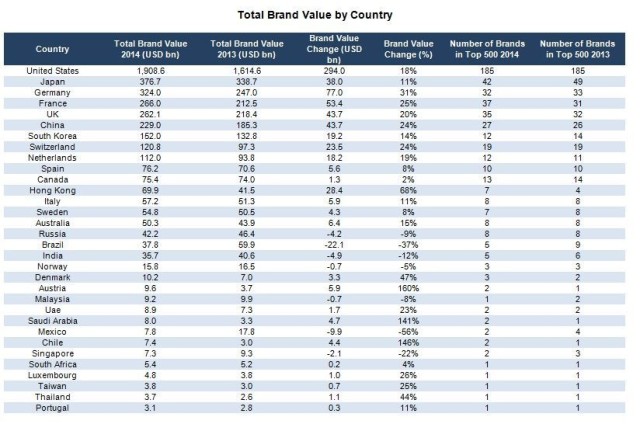