Want to watch the Winter Olympics in Sochi, Russia, but don’t have a TV? Or do you have a TV but just prefer the coverage given by other countries?

Then you’re in the right place. Today we’re going to take a look at ways to watch the games on your Mac and iDevices, and which apps you might want to use to follow along with the fun.

BBC And Other Foreign Services

With a twist of irony, the tools we’re going to use to defeat region-locked streaming apps is the same that we use all year round to access NetFlix, Hulu and the like. Services like the BBC’s excellent iPlayer check your IP address to make sure you’re inside the country before they’ll let you watch anything. To watch from outside the UK, then, you have to fool the Beeb’s app into thinking you’re inside the country.

There are two practical ways to do this. One is to use a VPN (Virtual Private Network), which is essentially an escape tunnel through the internet which pops up in the country of your choice, funneling all your traffic and making it appear to be local. It works, but it’s a brutal tool.

The second is to find a service which uses DNS (the internet’s phone book – it translates the addresses you type into Safari into the actual numerical addresses of the site you want to visit) to redirect only the packets the foreign service is checking. In physical terms, it’s like having all your papers in order at the border, and then just carrying through a huge trunk of, uh, DVDs with nobody noticing.

The DNS method has the advantage that the actual video stream comes to you untouched, direct from the source, so it runs at full speed.

If you’re going to be watching the Olympics on the BBC, then here are the schedules.

I use this service to access Netflix in the U.S and the iPlayer in the UK. Prices start at $4 per month, but there’s a free 8-day trial which should be just fine to get you through your sports fix. To use it, you just change the DNS server on your iPad, iPhone or Mac, and then hit a link to tell the service where you are (this registers your IP address with the service so it know’s that you’re you.

And that’s it. The mechanics are a little more complex, and you can do clever things like change the DNS for your router so every device in your home is covered. For in-depth instructions, see the article I wrote a year ago, which is still current.

There are a couple of things to note here: the service doesn’t work over cellular networks, and you can, if you like, tweak the settings to switch off the service for any site you choose.

Many apps are region-locked, only available in the App Stores of their home countries. If the app you want is paid, then you’re out of luck – you’ll either need a credit card with a billing address in the target country, or you’ll need to find somebody in that country to buy an iTunes voucher and send you the number (iTunes vouchers can only be purchased with a credit card from the same country).

But free apps are easy. All you need to do is set up an account with the foreign app store. To do this, you sign out of the app store in iTunes or in the App Store app on your iDevice, and then switch countries using the drop-down or pop-up.

Then, fill out your details, making sure to use a different email address than the one used on your regular Apple ID (iTunes won’t let you use the same email twice). Then, when you get to the payment section, choose “none.”

You should be good to go, able to download any free apps from that store. Full instructions (from Apple itself, no less) are available in this knowledge base article.

NBC will also attempt to offer Olympic coverage this winter at a special NBC Olympics site, but I’ve already had my first #NBCfail. The site offers live streams (as I write this it’s the “Snowboard Slopestyle Qualifying”), but you need Flash installed to watch them Flash! In 2014! The quickest way around this is to go download the Chrome browser for your Mac, which has Flash built in. Just remember to cover your iSight camera with a piece of tape.

The other way to view the stream is to grab the NBC app. This is easy thanks to the fact that NBC’s web designers turned the video player into a giant link for the app on the iTunes Store. The even better news is that if you change your Mac Safari’s user agent to pretend it’s iPad Safari, then you get this window popping up. Over and over. And over.

Better, then, to head north. 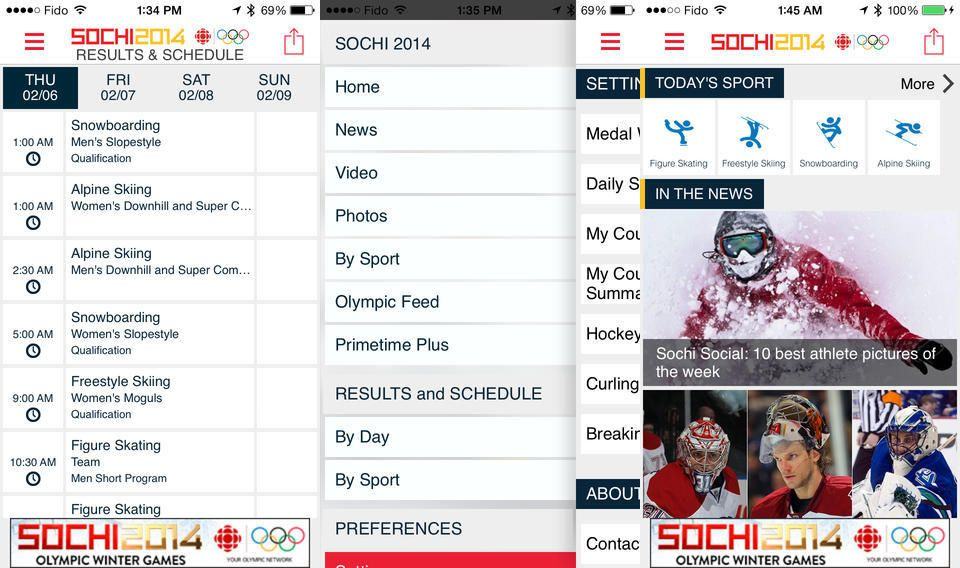 Up in Canada, where they know about winter sports and public TV, you can watch the Olympic coverage on the CBC site (there’s also an app, but it’s only available in the Canadian store – see iTunes Guide above for workarounds).

Or you can watch online. Thanks to the old-school deadlines of Newsstand publishing, I can’t check to see if these streams are available outside Canada, but if not you can just use the UnoTelly trick above (you’ll most likely need this to use the CBC app anyway). That said, it looks like it’ll just work.

Watching the Olympics is only part of the fun. For the full picture, you’ll want to follow along with apps that give info and comment. 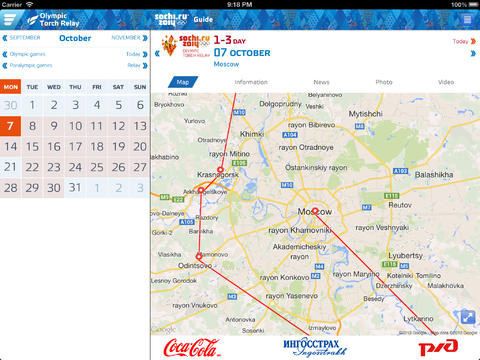 The official app is – if you believe the App Store ratings – terrible, slow, and hard to navigate. However, as the official app is should at least have accurate info and schedules. Amazingly, the app doesn’t actually have the results listings. For that, you’ll need another official app called, rather obviously, Sochi 2014 Results.

Sochi 2014 Results appears to be a lot better in terms of usability. You can choose the country you’re supporting, and follow along with the medal racer in real time. This actually sounds ideal – if it works. As ever, it can’t be tested until the games start. Still, both these apps are free. 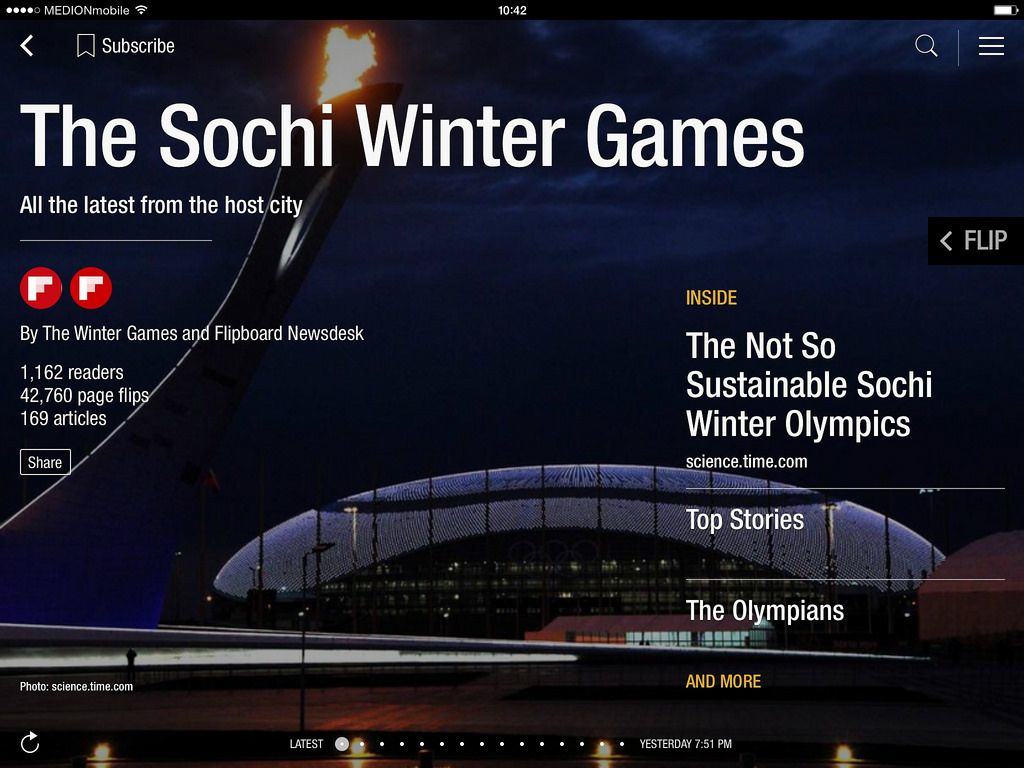 There’s one great app for following Olympic news that is probably already on your iPad: Flipboard. Go open it up now, tap the little red ribbon on the home page and choose the sports category from the list. Right at the top is the Sochi Winter Games section (right above “Curling NEWS” by Thomas Zimmermann). Tap it and you have access to all the great content curated by the Flipboard News Desk and “The Winter Games.”

There’s not much actual sports news in there yet, but of all the apps and services mentioned so far, this one is at least entertaining before the games start. You can read about journalists staying in hotels with stray dogs still wandering the corridors, and about the Jamaican bobsled team (spoiler: they forgot their equipment… again). 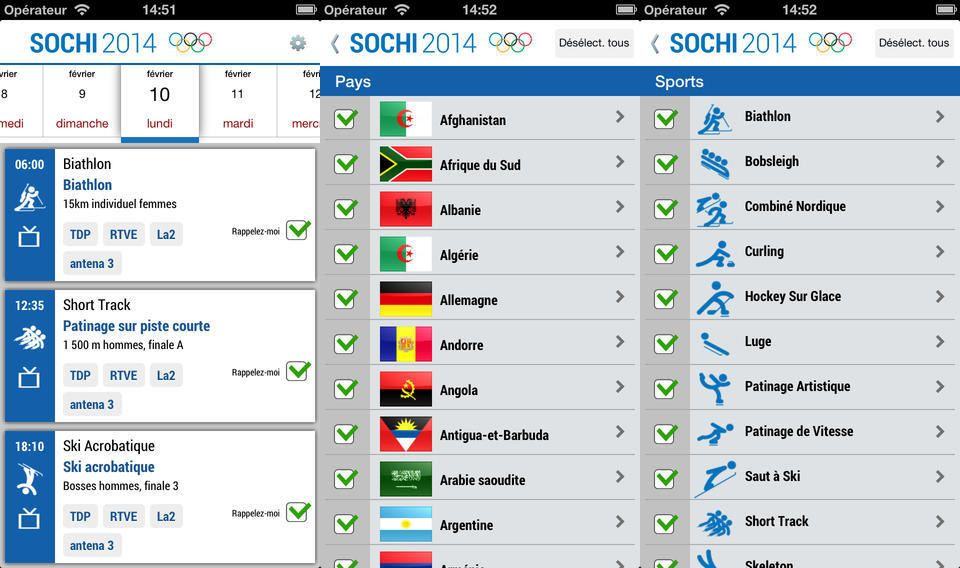 If you’re a sports fan, then you probably already have your favorite spot to get sports news, and apps like ESPN have already added a Winter Olympics tab to their coverage.

But both hardcore fans and casual Olympic followers can enjoy the single-serve Medal Alert app, which does one thing: sends push notifications to alert you when a medal is won by the country or in the sports you’ve set in the settings section. Between this and Flipboard, the casual user can keep track of everything important as it happens, and the hardcore sports fan can go crazy keeping up.

To finish up, you’ will be needing a delicious beverage to follow along with the games. In keeping with the wintery theme, you might like to prepare a hot drink ahead of time. Coffee, tea of all flavors and even hot chocolate are perfect companions for snowy sports. I’d like to make two recommendations. One is a thermos flask, the other is a method to make tea properly.

First, the thermos. For in-home use, any will do, but I prefer the Thermos Nissan range because of one thing: the lid. I use a thermos every day, either to keep my tea hot at home, or to actually brew fruit teas inside, or to take a hot drink on a cold bike ride. The Nissan-style lid is a solid block of plastic which is shaped to open a pouring channel when opened a few turns. This is both easy to clean, and easy to use.

Compare this to the lids on other thermoses, which use springs and complex multi-part mechanisms to let you pour through the cap. I find these to be leaky, messy and a perfect home for tea laves and germs. 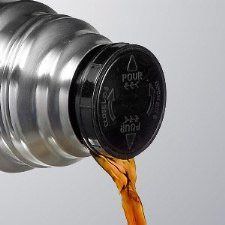 I don’t actually have a Thermos Nissan-brand bottle, because they cost like $100 as imports on Amazon in the EU. I use an Aladdin-brand model, which has the same clever lid design.

And the tea? It’s easy, but you have to follow the rules. First, the water in the kettle must be freshly drawn from the faucet. Do not reuse already-boiled water, as it will result in a flat-tasting cup. Second, the water should be actively boiling as it hits the tea. You need to wait by the kettle, and also make sure the teapot is already hot (I warm mine on the hob with a little water to get it ready, then tip the water out before adding the tea and boiling water).

You cannot put boiled water in a cup and serve the teabag on the side. This will result in a terrible cup. Complain if your waiter does this to you (although it’s fine for fruit teas).

Speaking of teabags, avoid them. Buy a teapot, a little metal basket, and a pack of proper loose-leaf tea to put in there. And don’t brew it for too long. I use three teaspoons (measured) of PG Tips tea, brewed for exactly two minutes (timed). If you want the tea stronger, use more. Leave it in too long and the tannins overtake the tea flavor and the tea becomes bitter and “stewed.”

That’s it. Enjoy the Olympics.