Ahh, iOS 7, you are so beautiful. Yet you are also confusing, especially to old-timers like myself who wonder where certain features have moved to.

I recently created two new albums in my Photos app, one for each of my kids. When I created each album, I was able to add as many photos as I wanted to, and then save the album.

Later, I wanted to go back and add more pictures of each child to each new album. But I realized I had no idea how to do so. I tried tapping the Share button, but found no “Add to Album” option. I was super sad.

Luckily, Apple has provided a way to add photos to existing albums, and, while it’s not as intuitive as I’d like, it’s not too difficult.

First up, be sure you have an album to add your photos to. To create a new Album, hit the Albums button in the lower right corner of the Photos app. Then tap the big Plus icon in the upper left corner. Name your new album, and hit Save. You’ll then get to tap as many photos as you’d like to add to the album upon creation. Do so, but leave a few out. 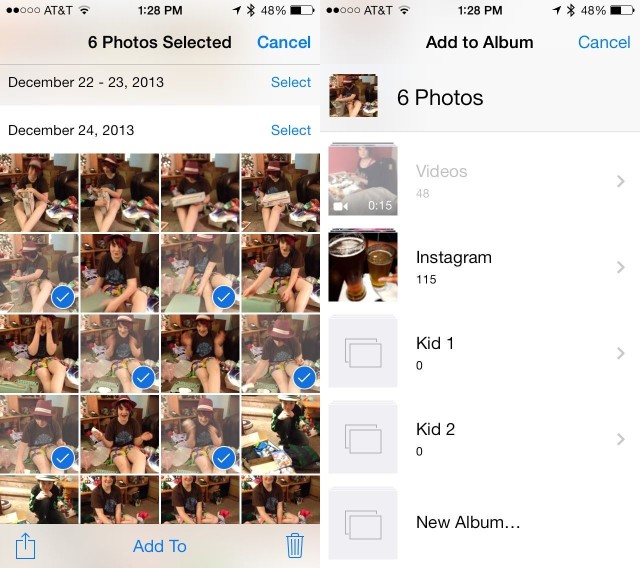 Now, head back to the Camera Roll, and tap into where all your photos are. Hit Select in the upper right, and tap on as many photos as you’d like to add to your existing album. Now, tap Add To in the bottom center of your screen, and you’ll see all your Albums slide up from the bottom. You won’t be able to add to the grayed-out albums like Camera Roll or My Photo Stream, but anything else is up for grabs.

Tap the album you’d like to add your photos to (or swipe to the bottom and create a New Album), and they’ll go right in with a cute little animation.

Boom! Now you can keep adding to your existing albums without freaking out like I did.