We take pictures to remember our own lives better and tell stories about the people who matter most to us. In older days, we had photo albums. These days, we have gigantic digital libraries on our computers, and a lot of the time it’s pretty disorganized. Sure, the most important photos are grouped into albums and what-not, but little else is. The meaning behind the pictures isn’t obvious.

Apple has taken steps to address this in iPhoto 09, adding in face detection and the ability to take people in pictures for searching by participant and searching by geography via GPS data, but these elements aren’t well-intertwined — and it does a bad job of considering the long view. That’s where MemoryMiner, a very nice piece of shareware from GroupSmarts, steps in.

MemoryMiner, just updated to a long-awaited version 2.0, allows you to tag your photos by the people within it, the date on which it was shot, and the geographic location. That much isn’t that exciting. But on closer observation, there’s a lot more you can do here. For one thing, MemoryMiner thinks about people in terms of lives, not as a static thing. So if you add in, say, your grandmother’s birthdate, it will tell you her age in each photo that appears thereafter. Even cooler, it then takes snapshots from each era to create a profile of what she looked like throughout her life. It’s all about the big timeline and the connections between people. 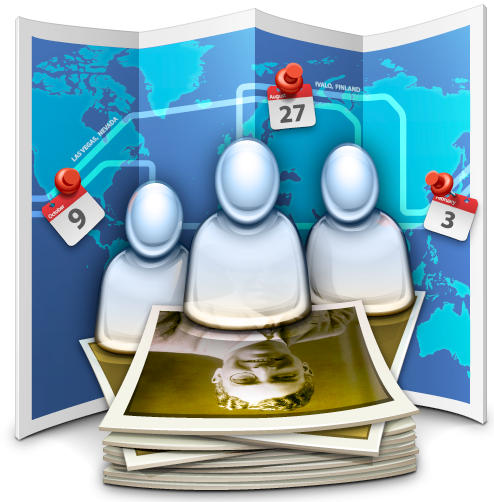 Even better, you can add in all kinds of annotations to your photos, from text, to audio, to video, even recorded right through your iSight. The biggest improvement in this version over previous iterations is much tighter integration with iLife. There’s a simple checkbox in the Preferences panel that allows you to sync MemoryMiner to your iPhoto library at startup. It’s a surprisingly fast import (I’d guess under 15 minutes from my 4,700 photos on a 2008 Unibody MacBook), and it doesn’t actually duplicate the photos — it literally uses the same ones found in your iPhoto library.

All told, it’s a really remarkable tool that makes me want to start scanning pictures out of my parents’ photo albums. Which I suppose is the point. If you’ll excuse me, I have 4,000 pictures to annotate.

MemoryMiner is $40 for a full version and $20 as an upgrade from version 1.0. Visit the company’s site to purchase and learn more.