Speaking to Apple employees who worked at the company during its first decade, the people who seemed most frustrated were the ones tasked with getting big business to buy Apple computers, instead of the IBM units they were used to. What a difference several decades makes.

Although Windows is still the operating system system you’ll find in most corporate and government offices today, a new study by Forrester Research shows how the popularity of iDevices is prompting corporate tech managers to change their traditional buying habits.

While the popularity of Microsoft Windows fell, global business and government spending on Apple computers and tablets rose from 1 percent in 2009 to 8 percent in 2012, Forrester Research claims. Furthermore this figure is predicted to climb to 11 percent by 2015.

Most impressive of all, these numbers exclude the iPhone, which having overtaken the Blackberry as the business phone of choice, may be the most widely purchased Apple product by corporate clients. 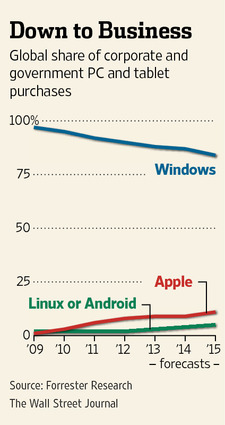 Pearson describes the iPhone as the “tip of the spear” and claims that JAMF’s software manages 5x as many iPhone, iPads, and other Apple computers as it did three years ago.

Although Apple historically downplayed the sell-to-business market (outside of the media industry), Tim Cook has increasingly targeted corporate tech managers during his tenure at the company — focusing on ways to link iDevices with corporate email systems, as well as emphasizing the importance of protecting corporate data.

Apple’s recent iPad campaign — while still aimed at the general consumer — focused on how the tablet was being used effectively within a variety of workplace settings.

Number of comments on this postLeave a comment
Posted in: News Tagged: government, iPad, iPhone