In the world of minimalist text editors that do geeky things like support Markdown, iA Writer is one of the best. Made by Information Architects in Tokyo, the app has sold over 1,000,000 copies in the App Store since its release in 2010.

The followup to iA Writer has been released today on Mac and iOS. It’s a jaw-dropper. Talk about the perfect balance of a lightweight interface and awesome feature set.

The app is broken down into four different modes: Note, Write, Edit, and Read. Each one serves its own purpose and comes with its own, custom-made font. The killer feature is “Syntax Control,” a tool that scans your text and breaks it down into its different elements, like nouns, verbs, adverbs, adjectives, and conjunctions. If you write often, this allows you to see and correct words or phrases you often repeat. No more saying the same things twice! 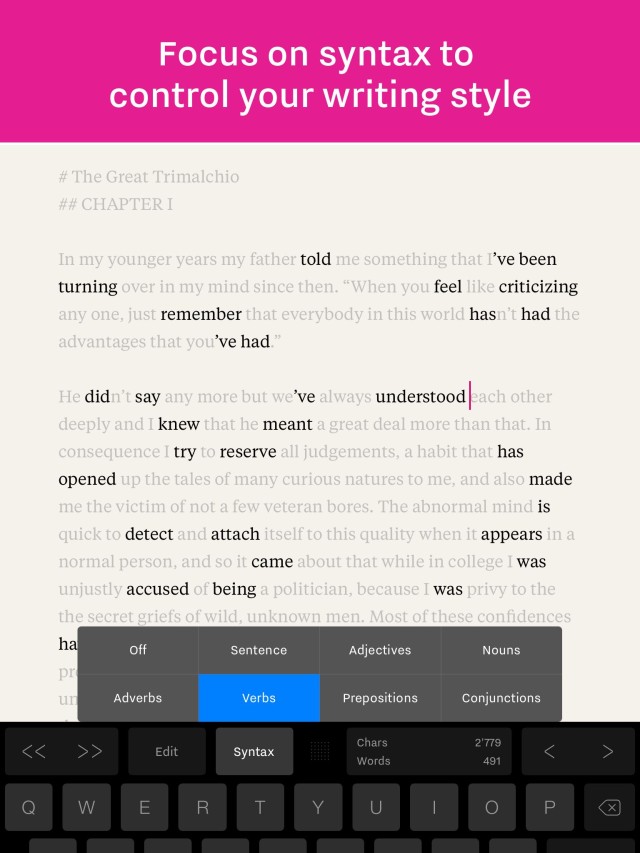 iA Writer had a “Focus” feature that blurred out everything but the sentence you were currently writing, and Syntax control is a natural extension of that with much more to offer. It looks incredible. Syntax Control currently supports English, French, German, Italian, and Spanish.

Writer Pro automatically formats Markdown syntax as you write, which is great for writers who deal with HTML. There’s iCloud sync to keep documents up to date between the Mac and iOS versions. As you type, you can see the reading time, number of sentences, words, and character count for your document.

Watch the head of Information Architects explain how Writer Pro was made:

The app isn’t for everyone. It’s priced at $20 on the Mac and $20 on iOS. But it will be hard for writers that love iA Writer [1] and those looking for a great writing tool not to drool.