Apple EarPods are sleek and gorgeous. For most people like me though, they fallout all the time. Moshi has released its new Mythro earbuds that promise to stay in-place while still sounding good at an affordable price, so we’ve decided to put them through the ringer to see if they’re a suitable cheap earbud alternative. While we’re at it, we also take a look at Moshi’s first ever iPad charger, the IonBank 10k. It’s light, white, and sleek all over, but does it have enough juice to make it worth carrying around? Check out our findings below:

You’ve probably seen Moshi’s newest earbuds recently at one of the 700 AT&T stores nationwide included in the initial roll out. The Mythro earbuds are being marketed as an affordable step-up from the standard issued iPhone earbuds for $30. 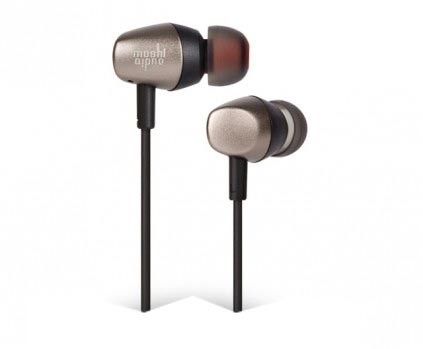 The earbuds unusual name was inspired by “Mithril”, a rare metal from JRR Tolkien’s novels. At first glance, the headsets do have a metal appearance to them, especially with sleek and shiny color combinations like gunmetal gray, jet silver, rose pink, and burgundy red – purple and gold option are also available. The Mythro is constructed with aluminum housing, another metal but not so rare, which Moshi argues makes for a better sound than the traditional plastic housing. It can also take a beating but is still lightweight.

Rather than resting directly against your skin like Apple’s EarPods, the Mythro features silicone earbuds that come in three sizes to fit every possible ear, with the exception maybe of Dumbo. It makes for a snug fit. I especially liked the color coding of the tips with the red tip for the right ear and the white tip for the left ear. After some heavy daily use I found that they stay in really well, and they’ve never fallen out while exercising. In fact they are quite comfortable.

The wireless mic is great for talking and has a universal button control for taking calls, but a volume control would be a great addition, if it truly wants to compete with EarPods.

What I think sets the Mythro earbuds apart from the competitors is a simple strip of Velcro that is permanently attached to the cord. For a lazy person like myself, this is pure genius. I have wasted so much time digging around in my bag for earbuds, only to find a tangled mess of cords to fight with. The HandyStrap takes seconds to secure and keeps the cables manageable. Most headsets come with a small case for storage which I almost immediately lose or don’t use. 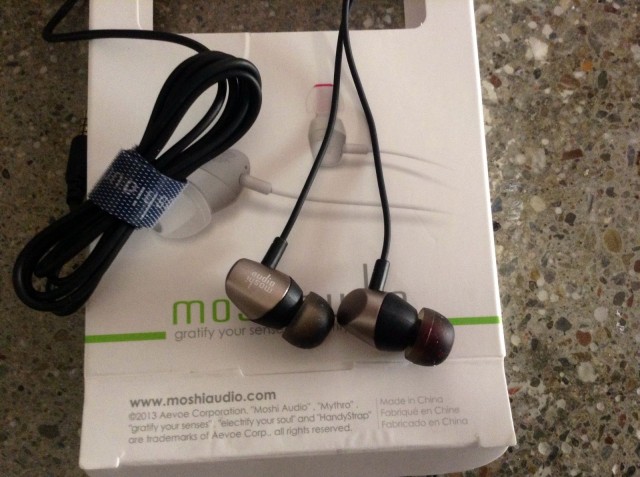 The sound quality is good with a decent bass and pretty good sound isolation for the price. I wasn’t expecting to be blown away by the sound quality at this price, but the Mythro’s sound pretty decent for $30. To be honest, Apple EarPods may sound bassier, but then they always fall out, so I prefer the comfort of the Mythro.

For $30 the Mythro headset is a steal. It looks fantastic and sounds great. 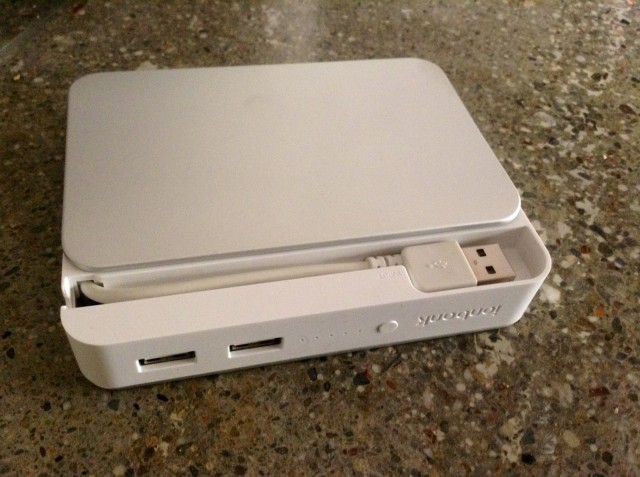 The IonBank 10k has come in handy a ridiculous amount of times while I’ve reviewed it, in fact, as I write this I have both my iPad and iPhone plugged into the IonBank 10k and charging.

While the IonBank is small and pocketable the power it packs is substantial. It’s a simple product and no directions are necessary. At 4.84″ x 3.15″ x 0.98 it’s hard to believe that such a small simple box can pack 10,000mAh of power, which was enough juice to give my iPad about 7 hours of extra power on a single charge.

Moshi sleeps in your bag all day like a vampire, ready to bust out a jolt of charge at a moments notice. My iPad already has 12 hours of battery – although sometimes it feels ll and can go all-day long, but then you plug it into the IonBank and it’s up all night too.

Like most of Moshi’s other products its slick with a silver sheen on both sides. It has two USB ports for a combined output of 18W, accompanied by a push button battery indicator, two USB slots and a secret sliding door that stores the USB charging cable. It also uses dynamic power sharing or DPS to adjust to the optimal charging rate for every different device you shove in its plugs.

To charge the IonBank 10k simply plug the USB cord into a USB wall or car charger. It comes with a travel pouch for protection and they plan on starting a recycling program with discounts on future products next year.

If you’re looking for an all-day battery charger that won’t weigh you down, I’d highly recommend the Moshi IonBank 10k. Battery chargers aren’t the most exciting product, but at the end of the day I always end up needing one. The 10k is affordable and its small body packs enough power to make sure your iPad gets more than 12hours of battery life a day.