I’ve played digital card games on my iPad before, including some heavy hitters like Might And Magic: Duel Of Champions and Magic 2014.

I’ve played some real-time battle arena games, like Raid Leader or Skulls of the Shogun, and enjoyed them as well.

But I’ve never, until now, played such an engaging mashup of the two gaming genres. What Singapore-based Spicy Horse has done here is create nothing less than a sublime, well-balanced, purely addictive combination of collectible card game, arena-based real-time strategy, and a training/leveling up system that just begs for exploration and mastery.

There are two main battle systems in The Gate, one a single-player affair that has you moving through a geography of battles, each one full of waves of baddies that you must vanquish in real time. The characters you use on the battlegrounds come from your deck of cards, each with their own level, evolution stage, special skills, and damage stats. Every character also has an element associated with it, with Earth, Fire, Electricity and more in the mix.

This system alone is engaging enough to keep me coming back to the game again and again. Figuring out how to direct the troops to damage monsters and heal each other is a sweet zen-like challenge. After each battle, you’ll get more cards with monsters you can use in battles, or that you can sacrifice to help upgrade your current characters, like many digital card games out there. As you level up, you can attempt harder arenas in single player, and then even challenge other folks in the Arena battles. 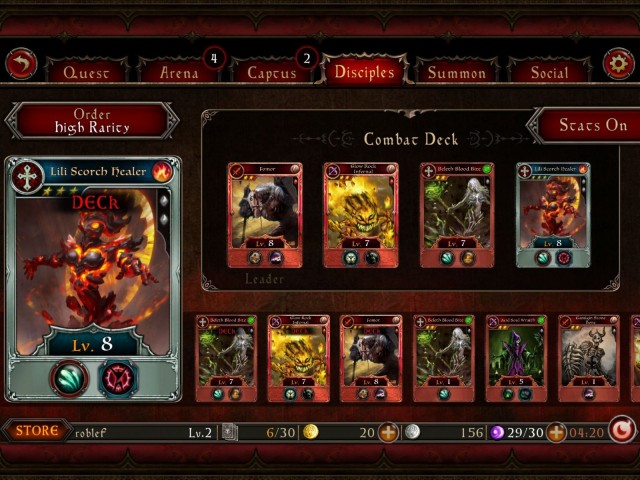 These randomly matched battles provide the second battle system, pitting you against other players of The Gate who have also upgraded and evolved their battle deck characters. Evolution puts another bit of complexity into the system, letting you sacrifice another card of the same character to add to your monster’s basic stats like hit points and defense modifiers.

Social play is highly encouraged here. Every once in a while, you’ll get a message from the game pointing out another player who you are given the option to friend. Once players friend each other, they can be used–once per day–in Quest battles that might be a bit too hard for your own main battle deck of characters.

There’s a predictable cycle in any gameplay sessions – Quest a bit, grinding up levels and gaining new cards to sacrifice and level up the good battle cards in your collection. There’s a summoning system and a “Captus” system (that plays like a game of Memory match-two) that allows you to gather even more cards to use in this way. 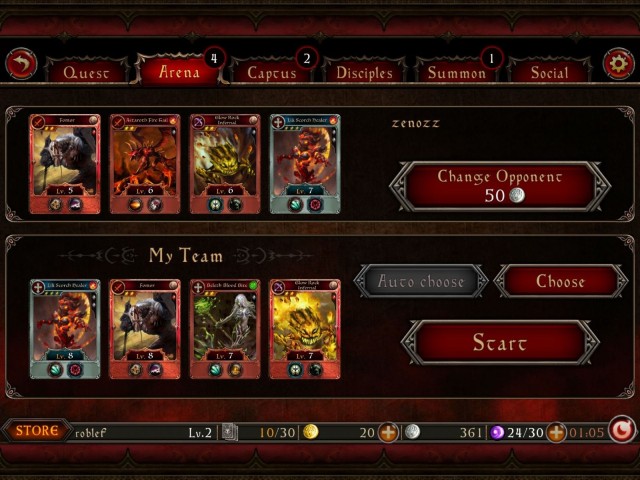 All of this is infused with a free-to-play sensibility that seems pretty darn fair. I’ve not wanted to spend any money just yet, as I’m still able to upgrade characters and gain new cards daily with the points and coins I hear through gameplay. There’s of course booster pacs and higher-rarity cards on offer via direct in-app purchases, but nothing, so far, has been very necessary.

Bottom line, The Gate is a extra-sticky game that combines the addictiveness of leveling up, training and battling your characters with the fun of collecting and finding rare cards along the way. It’s a well-tuned system, as well, and battles feel fair and balanced even when you lose.