Now that winter has hit the country, cycling has moved indoors for much of the U.S. That means straddling a stationary bike or throwing your trusty road or mountain bike up on a stand (or if you’re really brave, rollers).

That’s where the Xspin comes in. it’s a small box filled with sensors and a low-energy Bluetooth 4.0 radio that attaches to a crank arm and sends speed, distance and cadence data to an accompanying app — either one of two developed by its parent company, Pafers, or a handful of popular third-party cycling apps, like Strava or MapMyRide. It’ll also work with ellipticals (though it obviously attaches differently, since ellipticals don’t have cranks).

True, many stationary bikes and ellipticals have their own displays and methods of tracking data, and with bikes on rollers or stands, it’s <i>sometimes</i> possible to relocate your bike computer from the fork to a rear stay. But most bike computers or stationary bikes/ellipticals can’t blend their logged data with logs from GPS bike apps like the ones mentioned above, or share session data socially. Xspin can.

Of the two Pafers apps, Cycle on Earth is definitely the coolest. Similar to their run-themed app, Run on Earth, it allows you to ride virtual routes cobbled together from Google Street View images. Cycle Rush 2, on the other hand, resembles what one might find on a stationary bike at a gym: programmable training regimens and an easier to read, business-like interface with more data. 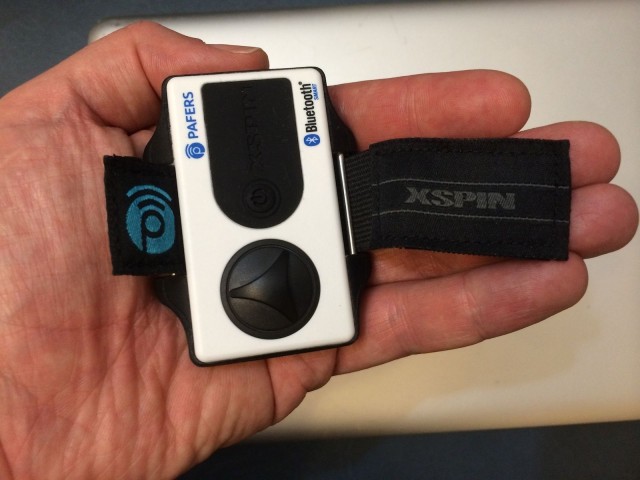 One note: I had a little trouble trying to attach the sensor to two different stationary bikes at the first local gym I tried; the two bikes had cranks with wildly varying thickness — one too thick for the Xspin’s strap, and the other too narrow. The Xspin box actually contains rubber spacers to take of the latter problem, but I was a little hesitant to use them on the gym’s bike. Also, because Xspin uses Bluetooth 4.0, it’s only compatible with the iPhone 4s or the iPad 3 and above.

The Xspin is available now for $80