Apple has topped the list of world’s most valuable brands for the third straight year in a row, and is now worth almost twice as much as any other brand on the planet, Forbes reports. The Cupertino company is now valued at $104.3 billion, up 20 percent over last year, which puts it way out in front of Microsoft, Samsung, and even Google.

It’s all thanks to increasing iPhone and iPad sales, and the continued success of services like iTunes. Apple sold a record 33.8 million iPhones last quarter, as well as 14.1 million iPads and 4.6 million Macs. iPod sales continued to decline, but Apple still sold 3.5 million of them during the three-month period, and 26.4 million over the year.

As a result, it secures the top spot in Forbes’ list of most valuable brands for the third year in a row.

Microsoft takes second place in the list with a brand worth $56.7 billion — $47.6 less than Apple’s — but its value is flat over the past three years due to its struggle to make a mark in the mobile world with products like the Surface and its Windows Phone platform.

Third-place Coca-Cola, which is valued at $54.9 billion, is the only brand in the top five that isn’t a consumer technology giant. The company sold a whopping 13.5 billion cases of Coke in 2012, up 3 percent from a year earlier thanks to international growth. It’s also the first brand to have reached 50 million “likes” on Facebook.

IBM and Google, with brand values of $50.7 billion and $47.3 billion respectively, make up the top five. Google has enjoyed the biggest value change over the past year with a rise of 26 percent. 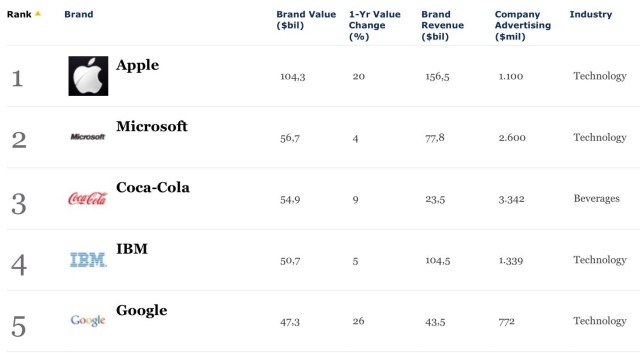 Samsung, arguably Apple’s biggest competitor in the mobile industry, ranks ninth place with a brand value $29.5 billion — but it has seen the strongest one-year gain of any brand in the top 100, rising 53 percent. Over the past three years, Samsung’s value has soared an incredible 136 percent.

Just three years ago, the ninth spot was occupied by Nokia which was valued at $27.3 billion. Now the Finnish firm is valued at just $7 billion, down 55 percent from last year, and it ranks way down in 71st place.