If you’ve ever wanted to make viruses fight, Pathogen will help you realize your dreams. Pathogen is a board game that has you infecting tiles to eventually take over the entire playing field. You can play versus the computer in an increasingly difficult campaign mode or challenge your friends.

Perhaps I’m not quite as good at “Go” as I thought I was, but Pathogen’s difficulty is undoubtedly the first thing you’ll notice. The computer in the campaign is prepared to take advantage of your mistakes at every turn.

I’ve frequently been so close to winning a match only to have the computer claim victory because I forgot to take over one of its pieces butting up against my wall of viruses. 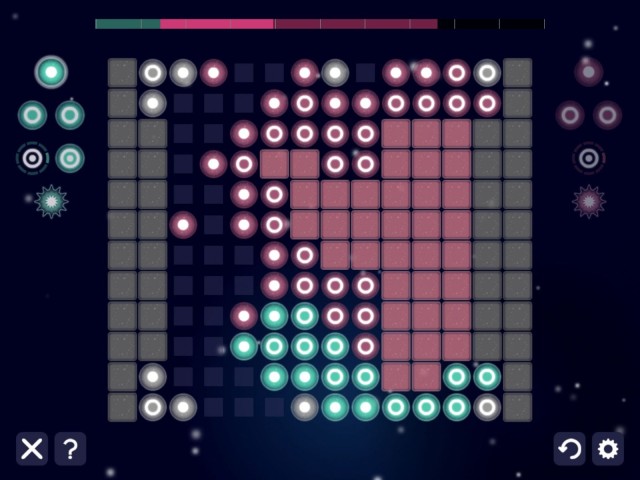 Luckily, if you can identify your mistake before the computer’s next turn, you can roll back the last few moves and try a different approach. Using this feature effectively can help you identify how the computer calculates moves and will ultimately make you a better player.

One downside is that the menu animations are incredibly slow and kind of misleading at times. You have to tap on the mission categories, then the individual levels to load, but sometimes the app simply doesn’t want to respond.

You also can hurry through the animation to unlock the next series of levels which isn’t the biggest deal, but you’re very aware of the amount of time it takes to move from one game to another.

Overall, I find Pathogen very stressful, but satisfying if I can best that darned A.I. The menu speed isn’t the biggest deal if you enjoy the gameplay, and it’s a blast to play with friends.

Just, explain how the mechanics work first because you can easily overwhelm an opponent if they don’t know that moves stack and some actions can override others.