As a product designer, one of my favorite parts about any new Apple product launch is the inevitable “How it’s made” video. The Mac Pro incarnation did not disappoint.

What makes Apple fascinating is not that they are using some wiz-bang alien technologies to make things – even here in Portland, Oregon, all the technologies Apple shows in this video are in-practice across numerous local factories. What makes Apple unique is that they perform their manufacturing with remarkable precision and on a scale that is simply astonishing, using techniques typically reserved for the aerospace or medical device industries.

The big story with the Mac Pro is deep draw stamping.

When uncle Phil said that Apple was using technologies that were new to them to make the Mac Pro, the brunt of his statement was focused on how the cylindrical case of the machine is formed. Here, Apple is using a process known as hydraulic deep draw stamping.

Most metal stampings go through one or two die tools to produce the final shape. With the Mac Pro though, the challenge is to produce a massive amount of plastic deformation without tearing, rippling or deforming the perfect cylindrical surface. To do this, the enclosure is drawn through a series of dies that progressively stretch the aluminum into something approaching the final shape of a Mac Pro.

Deep drawing is a process that very efficiently produces a “net shape” part. Apple could have just chucked a giant hunk of aluminum in a lathe and created the same part, but that amount of metal removal is extremely inefficient. Deep drawing efficiently creates a hunk of metal that is very close to the final shape of a Mac Pro in just a couple of operations. After that, the Mac Pro enclosure is lathe turned to clean up the surface and achieve desired tolerance, polished, placed back in a machining center to produce the I/O, power button and chamfer features and finally anodized. 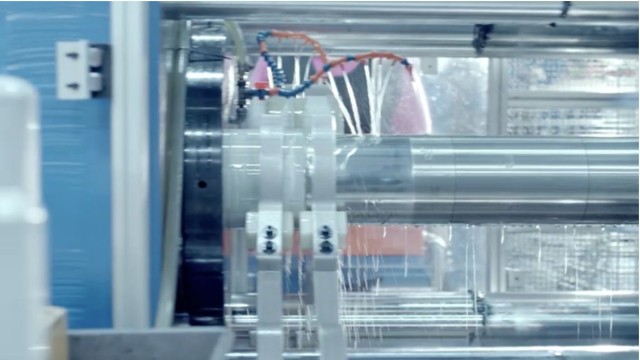 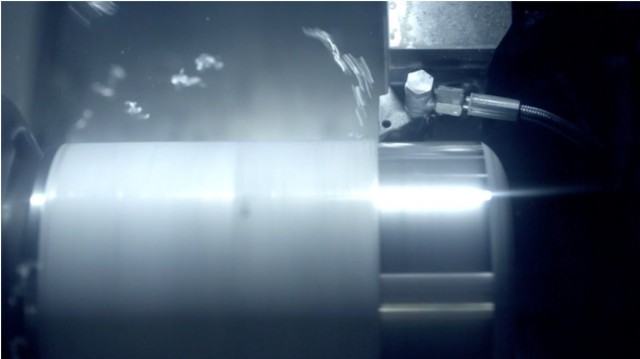 Here, Apple uses a CNC center (rumored to be one of two dozen Mazak NEXUS lathes delivered to Apple) to profile the outside shape of the Mac Pro. This step brings the part into high-precision tolerances and removes the relatively rough surface finish produced in the deep draw process. On the left side, we can see that the slight curve on the bottom of the enclosure has been machined. 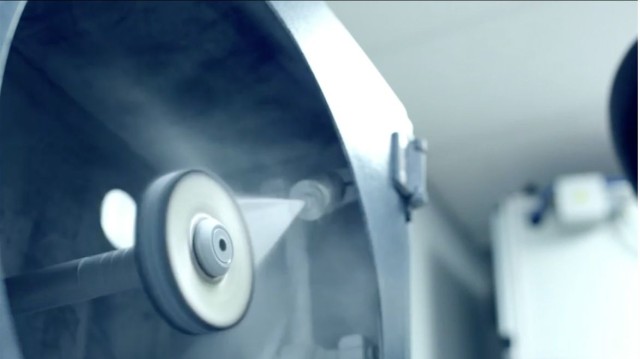 As lovely as they are, machined surfaces are not up to Apple’s standards. In this segment of the video, two Kuka robotic arms with custom end actuators spin the Mac Pro’s enclosure around polishing wheels to produce a near-mirror surface finish.

Just as the enclosure is moved onto the internal polishing station, the machine spits a fresh load of polishing compound onto the wheel. 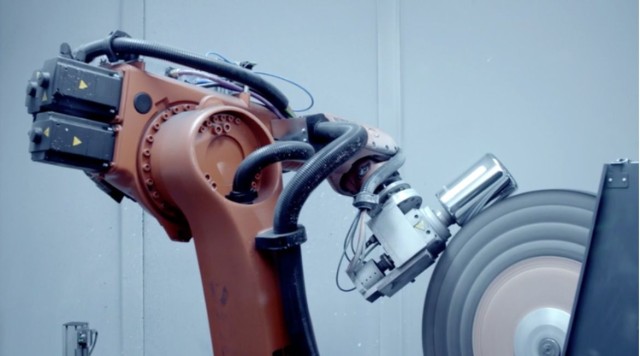 Similar technology is used in high-volume knife production for creating both the grind profile and sharp edges of blades.

Precision equipment used in grinding and polishing operations such as this must be meticulously maintained. The fine dust produced works into bearings, actuators and ball-screws, wreaking havoc. 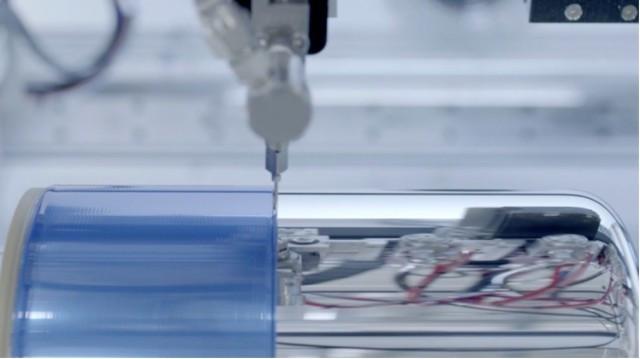 The freshly polished enclosure is coated with a surface protection film to prevent damage during the upcoming milling operations.

Why machine these openings after polishing? The open edges would not only get marred by polishing, but the cloth polishing wheels would get ripped to shreds on them in no time. 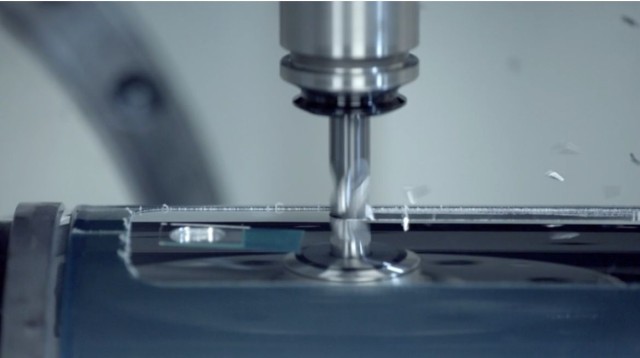 The Mac Pro enclosure is back in a CNC center where the I/O slot is cut out. This is likely the same machine/operation where Apple cuts the trademark chamfer on the top of the cylinder.

Point of Interest: notice the end mill and holder are being reflected off of the freshly polished MacPro surface, yet the pocket profile has already been cut from the protective film. My best guess is that the original plan was to simply machine through the protective film, but the cutting action of the end mill wound up tearing the film’s edges dinging up the surfaces slightly. The solution was to add a step where the film was removed from the areas to be machined.

Details like this, multiplied a thousand times across the Apple manufacturing empire, are why Apple products are the vanguard for high-volume AND high-precision. 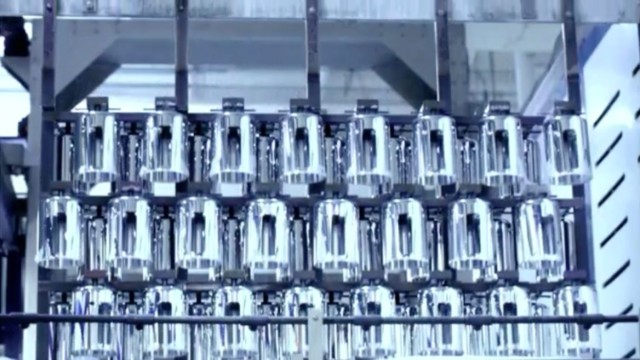 Here we see a batch of enclosures racked for anodizing. In typical anodizing, an acid etching step takes place to throughly clean the part. With such high surface finish standards though, I’m betting Apple either very lightly etches or used very gentle etching compounds to maintain the mirror-like qualities they spend so much time producing. 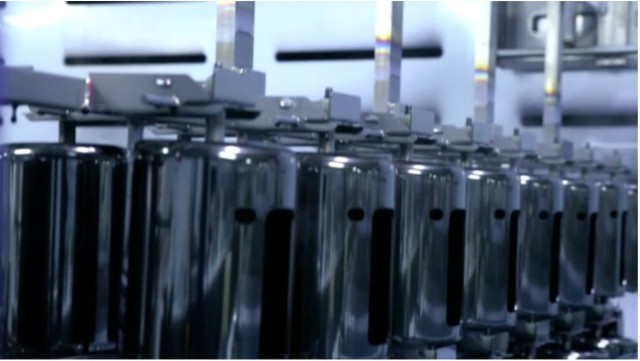 Anodizing isn’t a coating, it is a transformation. Electrical current is run through aluminum in an acid bath, causing oxygen molecules to bond to aluminum producing a thin, uniform layer of aluminum oxide (basically: aluminum rust). Because this surface layer is porous, dye can be used to add nearly any color to the aluminum part before the surface is sealed.

The racks themselves are typically made of titanium and you can see how repeated trips through the anodizing line has effected them by the color distortion on the rack arms near the top of the image.

While Apple clearly wants to highlight the part responsible for the unique shape of the Mac Pro, many of the  interesting manufacturing details are to be found in the various other small parts that make up the guts of the thing. Apple doesn’t show us much of that process. For example, I would really love to know how Apple is manufacturing the Mac Pro’s fan; as the complex curves and limited access make turbine manufacturing sort of the gold standard for complex part making (just Google  any CAM/CNC machine company and the first video they will show off is some sort of turbine being made using their software or machine).

What we do get to see is the triangular core/cooling tower of the Mac Pro going through a neat automated bead blasting process. 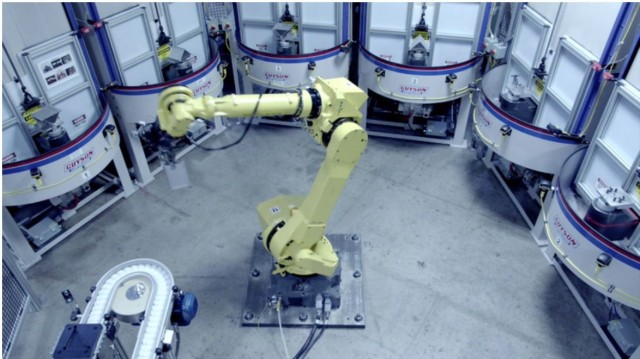 This is a cell of Guyson automated bead blast cabinets used to finish the surface of the triangular cooling tower inside the Mac Pro. The Guyson cabinets, like much of Apple’s equipment, are highly customized and are likely flipping the part internally to blast both the front and back.

Tending to the cell is a FANUC robotic arm. This is a big difference compared to Apple’s Chinese factories where machines are almost all tended by humans. US labor costs make a $90,000 FANUC robot pencil out. 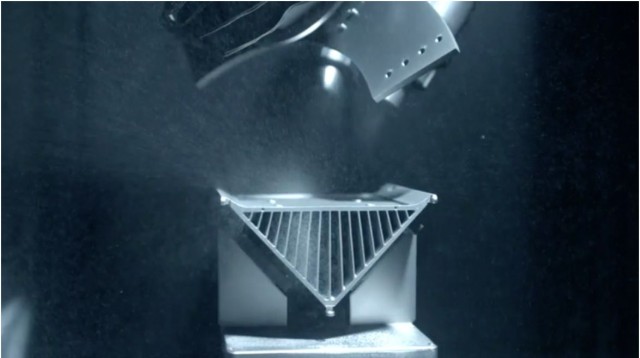 Here we can see the Guyson robotic blast system at work, using air pressure to force glass beads to uniformly rough up the surface. The bead blast nozzle has an apparatus attached to it that I suspect is an actuator for flipping the triangular cooling tower.

The triangular cooling tower itself is, like most heat sinks, extruded from aluminum and has features like holes and threads added later. From the limited pictures of Mac Pro internals I’ve seen, it appears as though large cooling pads are attached to this main sink; bead blasting will promote heat transfer when coupled with a thermal paste compound.

I wonder how the lens of that camera made out… 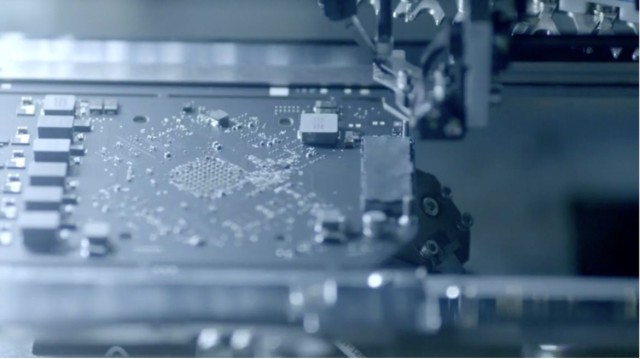 Making PCBs isn’t my schtick, but the appears to be a pretty standard Pick-and-Place machine. Every time I’ve seen one of these running, I am shocked at how fast they are. 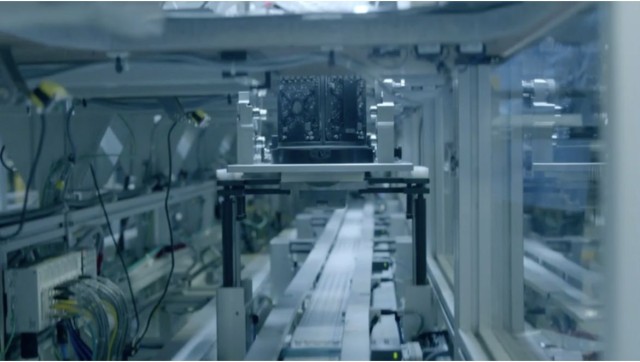 The hand assembly of the Mac Pro uses an under-table parts delivery system. I had never seen this before and called an assembly engineer I know who said these were a new trend; they save space by utilizing area that would otherwise be wasted, they make it easier to keep dust off the components and (most interestingly) they are more conducive to automated assembly practices when robotic technology catches up. 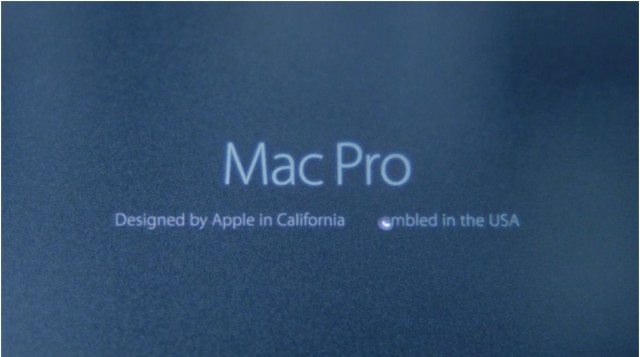 The laser operation is performed by a fiber laser. Volume production designed lasers have driven heads that are much faster than moving gantry lasers one usually sees in laser engraving shops (like Epilog lasers).

What the Mac Pro video puts on display is Apple’s unique talent for bringing together disparate manufacturing technologies to produce incredible precision at extremely high volumes. Sure, having $140B in the bank and the ability to bring a mind boggling number of zeros to a purchase order has its benefits, but plenty of resource rich product companies would never think of combining processes in the manner that Apple does routinely (see: injection molding, machining, polishing and coating an iPhone 5c case). With the Mac Pro, Apple has elevated a relatively low-precision/low-tolerance process (deep draw stamping) used to make my dog’s water bowl and toilet brush canister into the creation of an aerospace grade piece of desktop jewelry.

This post was originally published on Atomic Delights on Tuesday, October 22.