iOS 7 had been available to the public for just 27 days as of Monday, October 14 — and it had already been installed on 71% of all iPhones, iPads, and iPod touches. That’s according to the latest report from Mixpanel which suggests iOS 7 could be the fastest-spreading iOS update to date.

In comparison, it took iOS 6 30 days to reach a record 61% of iOS devices this time last year, and it appears iOS 7 has already smashed that record. But it’s hardly surprising; this is the biggest update Apple has ever made to iOS, adding not only new features, but also a brand new look.

It’s no wonder users cannot wait to get their hands on the new software, then.

When you compare iOS 7’s adoption stats to those of the competition, that’s when it gets really impressive. Windows 7, for instance, is yet to reach even 50% of PCs more than four years after it was released, while Android Jelly Bean had reached only 48.6% of devices this month — more than a year after its debut. 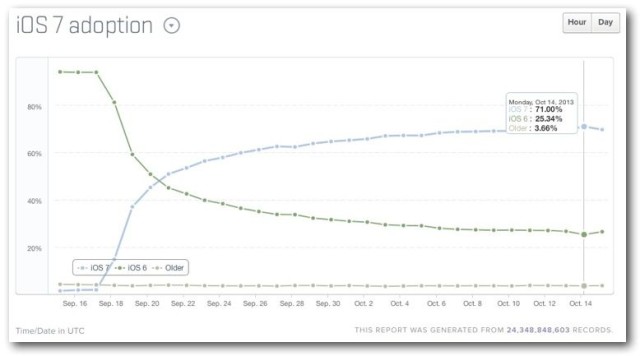 Apple is yet to confirm exactly how many iOS devices are now running iOS 7, but Mixpanel’s data indicates that 350 million are currently in use. That means that over 250 million of them were running the latest software as of Monday.