Some games just aren’t meant for touch screens, and it’s very unfortunate that The Cave is one of them. In developer Double Fine’s dark look at inner desires and magical caves, you guide three of the seven available “heroes” through a labyrinthian network of tunnels that slowly unveil each character’s inner corruption.

Its fantastic-yet-eerie atmosphere and stellar narration definitely translates well to portable screens, but the lack of physical controls or even on-screen button prompts is a serious issue.

I really enjoyed The Cave when I played it on PlayStation 3, and hoped that it would translate well to mobile. But, no matter which of my iOS devices I try, navigating ledges and performing relatively simple actions within the game feels awkward and clumsy. 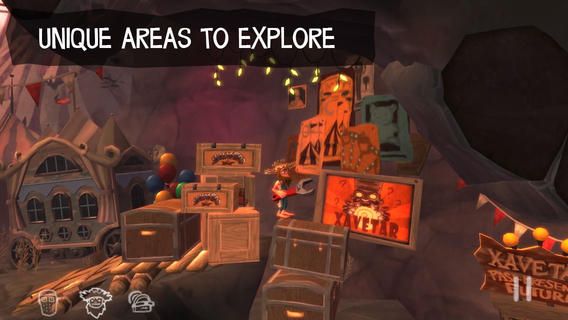 When you start The Cave, you need to pick up a crowbar from one side of the start screen and then use it to pry boards off of the cave entrance. This is a simple action in theory, but the lack of on-screen controls means you’re vaguely swiping and tapping in hopes you’re doing the right thing. You’ll probably fumble with the crowbar and throw it down before you clear the path.

Perhaps I just have sausage fingers…

The game does tell you when to swipe/tap/double tap in the “How To Play” menu option, but my gestures are rarely read correctly. Perhaps I just have sausage fingers, or I somehow drag a bit when I mean to double tap. All I know is the supposedly easy process of moving characters down a ledge and then up to another ledge turned into a few minutes of the knight clinging desperately to a wall in rebellion.

The Cave on iOS is beautiful and just as clever as the other versions, but is very cumbersome to play correctly. If you’re still interested in trying it, I say take a chance, but I think Double Fine missed the mark by not including at least an action button for certain tasks. Maybe I’m too stuck on playing earlier versions of The Cave, but early user reviews of the iOS release seem to agree with me on finding the controls a bit unwieldy.