While the iPhone’s Retina display may no longer be king when it comes to pixel count, it’s one of the fastest smartphone displays on the market, easily outpacing all of its rivals.

According to a TouchMark test carried out by Agawi, the Retina display responds more than twice as fast as any of its rivals — including the Galaxy S4 and other high-end Android devices — even on the three-year-old iPhone 4.

Agawi’s tests measured the minimum response times of the displays built into flagship smartphones from “top manufacturers,” including Apple, Samsung, Nokia, HTC, and Motorola. They used a custom-build app that causes the display to flash white when it’s touched; the idea is that the process is so simple that processing power would have no affect on the results.

The app was combined with a “Touchscope” that measures the response time by “ by capturing the time delta between activation of the Force Sensitive Resistor on the glove [worn by the tester] and the Light Sensitive Resistor positioned over the device.” Each device was tested a minimum of 50 times.

The tests found that the iPhone 5’s 4-inch Retina display is significantly faster than any of its rivals, taking just 55ms to respond to touch input. The iPhone 4 came in second place with an 85ms response time. The closest rival was the Galaxy S4, but even that took 114ms to respond.

Samsung’s flagship is faster than its rivals, though. The HTC One took 121ms to respond to touch input, while the Moto X, the latest handset from Motorola, took 123ms. 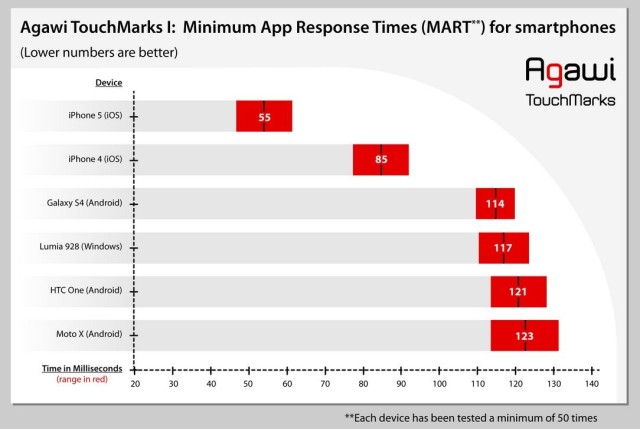 “There are several possible reasons for this,” Agawi states. “Since touchscreen hardware has significant latency itself our best guess at Agawi is that Apple’s touchscreen hardware is better optimized or more sensitively calibrated for capturing and processing touch. Another possibility is that while the Android and WP8 code are running on runtimes (Dalvik and CLR respectively), the iPhone code is written in closer-to-the-metal Objective-C, which may reduce some latency.”

“Regardless of the reasons, the conclusion is clear: the best written apps on iPhones will simply feel more responsive than similar apps on the current gen of Android devices.”

What’s most interesting about these results is that most of Apple’s iPhone displays are manufactured by Samsung, and yet the Cupertino company can optimize them to be twice as fast as Samsung can. Agawi suggests that this could be why many find the iPhone’s keyboard more responsive than those on Android.