When it comes to mobile gaming, the upcoming Google Nexus 5 could be one of the most impressive Android-powered smartphones to date. Leaked benchmarks that have surfaced online this week reveal the new device outperforms the Samsung Galaxy S4 and the HTC One in graphics performance, matching the new 64-bit iPhone 5s.

The benchmarks appeared on the GFXBench website, and they show the Nexus 5 scores 23 points for graphics performance. The only other handset to achieve that score is the iPhone 5s, while the Sony Xperia Z1 scores 21, the LG G2 scores 20, and the Galaxy S4 scores 16. 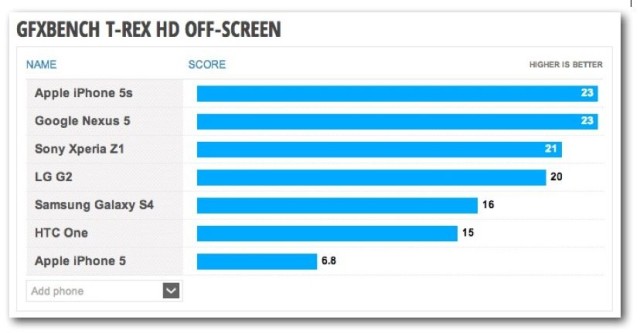 There’s always a chance benchmarks like these are fakes, so please bear that in mind. But we know Google is already testing the new Nexus 5 — we’ve even seen pictures of it in use on the Google campus in Mountain View — and it has already passed by the FCC, so it’s certainly possible that they’re genuine.